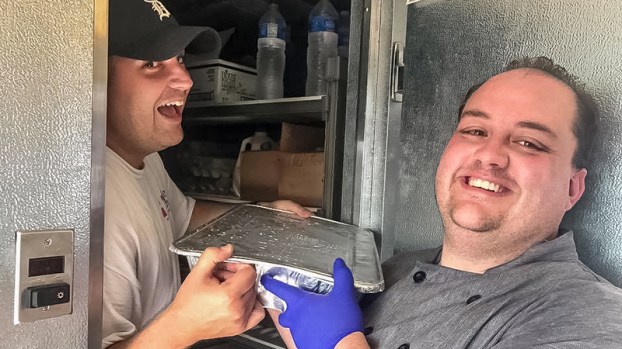 Dane Macan, right, and his brother-in-law, Michael Gozdzialski, prepare to serve food in Florida with the Mercy Chefs organization

A couple of people with local connections have been making sure thousands of people in areas ravaged by Hurricane Irma haven’t gone hungry.

Dane Macan, a Mercy Chefs volunteer, and Shauntrice Anthony, who with her husband Johnny is the corps officer for the Salvation Army in Suffolk, are both in different areas of Florida and Georgia, providing nutrition to people who still have flooded homes or are living without electricity.

Macan lives in Chesapeake and works for Sysco in Suffolk. He and his wife, Kristin, also a chef, have been involved with Mercy Chefs for almost 10 years. It was another disaster that caused them to join the organization.

“There was a group of tornadoes that did a lot of damage in Kentucky,” Macan said. “We felt the need that we needed to go and participate.”

Since then, Macan has been to Texas, New York, New Jersey, Florida, Haiti and even right here in Virginia with Mercy Chefs to set up a full commercial kitchen on a trailer and serve meals to disaster survivors. 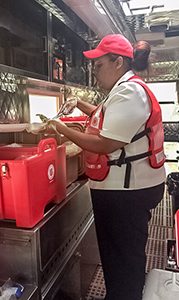 Macan started traveling to Florida last Saturday, when the team flew into Atlanta and drove to southern Alabama to wait out the storm.

“When the storm started weakening, we decided to start moving in,” he said.

The team set up shop in the area of Espero and Bonita Springs, between Fort Myers and Naples. They’re set up in a church parking lot, where their 43-foot mobile kitchen is capable of producing up to 10,000 meals a day.

Most days of their service in Florida, they have pushed the mobile kitchen to its limit, Macan said.

“It’s typical in disaster response, the first day you do less volume, and then the word kind of spreads,” he said. When local restaurants start getting their power and other infrastructure back, the team starts to consider packing up and heading out. “We don’t want to take away from the local economy,” Macan said.

Recent dinners have included Salisbury steak with mashed potatoes and green beans and a brownie for dessert, as well as barbecue chicken over rice with fresh salad and marinated vegetables and spiced apple cake for dessert.

“It’s more than what you typically see in a disaster response, but it’s all chef-inspired meals,” Macan said.

The team has been sleeping in a donated RV on this trip, but that’s a luxury. They usually have accommodations such as the floor of a church, and one team in Texas recently after Hurricane Harvey slept in a jail.

“Pretty much anywhere we can lay a pillow down, that’s where we’ll stay,” Macan said.

Macan said the work is hard and hot, but it is worth it to bring hope.

“We’re here for a reason,” he said. “We’re here for more than just to go to work, pay our bills and pay taxes. We’re just trying to show the love and hope of Jesus Christ to the people we meet.”

Macan said disaster victims are never charged for meals. People can sign up to volunteer or make financial donations at mercychefs.com.

Anthony, meanwhile, has been serving with a Salvation Army team in southern Georgia, which was also hit hard by Irma.

The organization sent eight canteens — essentially mobile kitchens — and nine officers to the area. From Sept. 8-14, Anthony said, the organization had handed out 46,338 meals, distributed 72,164 drinks and given out 39,354 snacks.

“I’m in a neighborhood where their houses were completely flooded,” said Anthony, who is familiar with the area because she was formerly stationed there with the Salvation Army. “they had about four feet of water in their homes. People are gutting their houses right now and throwing all their furniture out.”

Anthony said the meals served have included fish filet sandwiches with vegetables, a fruit cup and pudding, as well as ham with sweet potatoes, green beans, peaches and a roll.

Anthony said it is heartwarming to see how grateful and thankful most people are to receive the meals and other assistance.

“You come down here thinking you’re coming to help people, but the people have been so sweet and welcoming, I think I’ve been more blessed than I’ve been able to bless them,” she said. “We have long hours, but it’s been worth it. Every moment we’ve been here has been worth it.”

Anthony said the best way to give to the Salvation Army’s hurricane relief efforts is to text STORM to 51555 or visit helpsalvationarmy.org. One hundred percent of every dollar donated directly to hurricane relief will benefit survivors directly, she said.

Suffolk police are seeking the public’s assistance identifying a subject in connection with counterfeit money, according to a city press... read more