Hunter Ruggiero was voted the Suffolk News-Herald Player of the Week after medaling in a King’s Fork High School golf win over Wilson High School.

Being a senior on a King’s Fork golf team with a new coach has been good for Ruggiero. Last week, the Bulldogs defeated Wilson, and Ruggiero shot the lowest score of the match with a 92. Ruggiero said he was feeling good that day, which helped him lead his team to a victory.

“The match started rough, but I knew what I had to do to get to where I needed to be,” Ruggiero said. “So, I did what I had to do, and I was fortunate enough to get there.”

So far, the golf season has been going well for the senior Bulldog. In comparison to last season, he feels he has considerably improved. Every match has its ups and downs, but overall, he is happy with how he has been playing and how he has improved. He gives a lot of credit to current Bulldogs coach Robert Casteen. 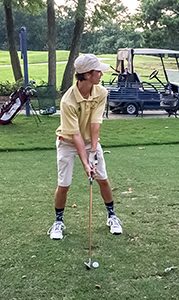 Hunter Ruggiero was voted Suffolk News-Herald Player of the Week after shooting a 92 for King’s Fork High School in a golf match against Wilson High School.

Ruggiero’s competitiveness is what motivates him when he is competing in a match. If he struggles on a hole, he makes himself forget about it and move on. He competes with himself more than he does with his opponents. He is always excited about each match, because he looks forward to seeing if he can best his previous score.

“I always try to make up for mistakes on the next hole,” he said. “I also keep track of how many strokes my competitors have so I know if I’m shooting better and where I need to be. It is just sort of the competitiveness inside of me.”

The 92 Ruggiero shot against Wilson was his best score. His goal now is to get into the 80s, but he makes sure he just tries to do better than he did the previous match. Over the summer, he rode to the driving range and hit a couple of balls to make sure his mechanics were good before the season started.

His coaches are instrumental to Ruggiero’s career. In previous seasons, the Bulldogs had played under coach Calvin Mitchell. He retired earlier this year, and Casteen took over, and he continued to inspire Ruggiero as well.

When not around golf, Ruggiero enjoys fishing and competes in fishing tournaments as well. Additionally, he likes hanging out with his friends.

Ruggiero will be in action again Tuesday when the Bulldogs face Churchland High School at Bide-A-Wee Golf Course.

The Warriors proved to be victorious Friday night at Lakeland High School as the rivals clashed. Rivalry games are always... read more