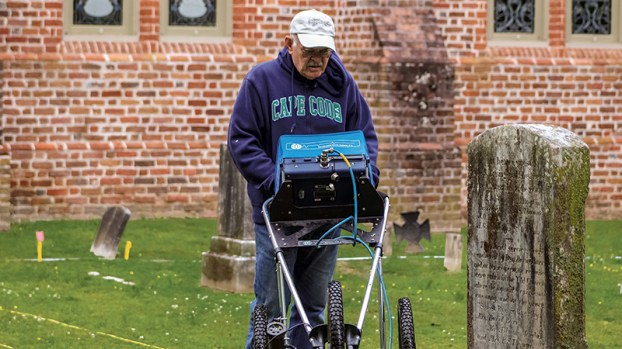 A ground penetrating radar survey conducted at Historic St. Luke’s Church in May 2016 revealed 300 to 500 unmarked human remains around the historic church. The project was part of a larger array of recent projects intended to preserve the history and security of the site.

Projects are under way to maintain and preserve the oldest church in Virginia and uncover its history.

Historic St. Luke’s Restoration, the educational nonprofit for the 17th-century church located on Benn’s Church Boulevard in Smithfield, announced on Monday that $765,000 had been awarded to the organization since January 2016.

This total includes more than $150,000 from board directors and other individuals, along with eight major awards from foundation and corporate grantors. The most recent was $100,000 in May from The Robert G. and Maude Morgan Cabell Foundation, according to executive director Todd Ballance.

These funds have gone toward a $1.7-million capital campaign as part of the second phase to preserve and promote the church.

“About 10 years ago, we secured our own historic district designation as St. Luke’s Historic District,” Balance said. “Due to the regulations and requirements of that designation, we have certain standards that we live up to.”

In May 2016, $60,000 was spent repairing and resurfacing the site’s primary roadway, the ‘Ancient Indian Trail.’ Three ponds were also dredged and restored, and the pond dams reinforced.

An $80,000 fencing project for the 100-acre site finished in May, and the parking lot was recently renovated, Ballance said.

“We’re addressing repairs, maintenance, and improvements to our grounds security, as well as the preservation of this ancient site,” Ballance said. “We need to make sure our campus is closed and secured at night and that it also maintains the historical appearance of the site.”

Upcoming projects include a brick wall extension for the memorial cemetery and improving the roofing and office space for the administration building. Ballance said the maintenance shed will also be moved and rebuilt at a more desirable location on the grounds.

In addition to maintenance, efforts are under way to uncover the history filling these acres.

A ground penetrating radar survey that was conducted in May 2016 revealed 300 to 500 unmarked human remains around the historic church. Ballance said the burials were done in Christian fashion, judging from their east-to-west alignments.

“It’s a British tradition for paupers and middle-class folks to be interred around church buildings without markers,” he said. “This gives us a sheer scope of how this site has been used over time, and the number of burials is consistent with the age of the church building.”

A $250,000 archaeological survey began in May at the Whitemarsh Farm to uncover historical artifacts and locate the rest of the remains of Joseph Bridger, one of the original patrons of the church. A portion of his remains was discovered in the church, but about three quarters of his remains are still missing.

The plan for how to proceed will come after the survey’s final report in 2020, Ballance said.

“We’re doing the things we need to do out here to preserve and protect the site and to continue celebrating and preserving its history for generations to come,” he said.