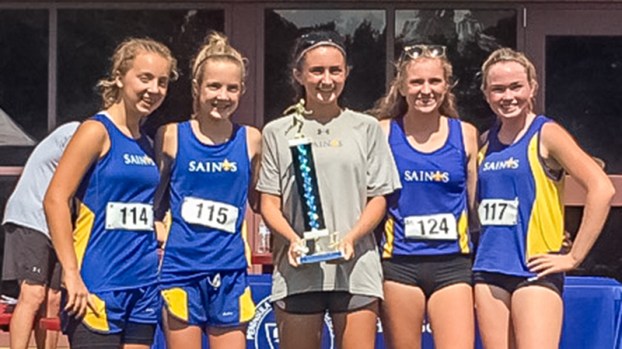 The Lady Saints cross country team has earned its second first-place finish of the year.

Emma Conrod finished first for NSA and third overall in the meet, with a time of 22:30. Frances Hope and Berkley Puzey finished fifth and sixth overall, respectively, and were second and third on the team. Abby Conrod and Camryn King finished ninth and 10th overall, which rounded out five top 10 finishes overall for NSA.

“Our only senior and team captain was unable to run this past Saturday because of an injury,” Lady Saints coach Karen Norman said. “I saw the other girls work together, even more, to compensate for her absence on the course. They are building confidence in themselves and as a team.”

Norman also mentioned that each week has gotten progressively harder. NSA had its hardest practice of the week Monday, and Norman felt her team responded well. NSA’s next meet will be this Thursday hosted by Walsingham Academy.