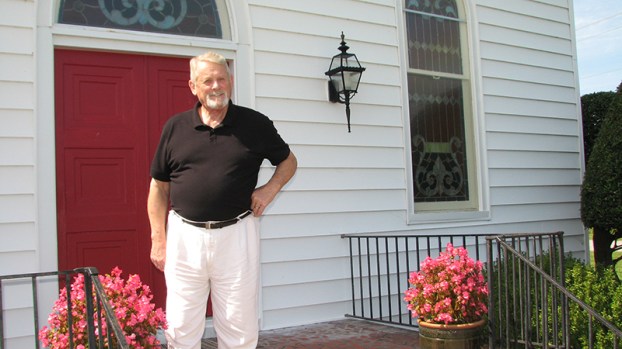 The Rev. Garland K. Hines Jr. stands outside Providence United Methodist Church, which will celebrate 190 years of history this weekend.

A stately white church at the intersection of Providence Road and Pruden Boulevard had humble beginnings 190 years ago.

Providence United Methodist Church was officially founded in 1827 and, a few decades later, was used as a field hospital and stable by the Union Army during the Civil War.

Much has changed since then, but the mutual love between church and community has not. The congregation will celebrate the anniversary this Sunday with a special speaker, the Rev. Bob Cofield, at its 11 a.m. service. It dedicated a new piano last Sunday.

“Methodist churches, you will find, they hang around,” said the Rev. Garland K. Hines Jr., who has been pastor there for about eight years. “People fall in love with them and don’t want to leave.”

The wheels that set the church’s founding in motion were already turning in 1797, when records show there were Methodist settlers in Suffolk, according to a history of the church. The Rev. John Fisher, a traveling preacher, organized the first Methodist society in the area in 1801.

By 1805, membership had increased to about 30, according to the history. But in 1827, a camp meeting was held at the fork of Pitchkettle and Murphy’s Mill roads. Hundreds were converted, and Providence was established as an outgrowth of this meeting, the history states.

Land was granted by a Mr. Goodson, and the church — a modest, white building that still encompasses the current sanctuary — was built.

The church was visited by circuit riders, and revivals were held every year. Services ceased in May 1862, as the war was raging in the vicinity.

In May 1863, the church was taken over by federal troops. A few Union soldiers died in the building and were buried on the church grounds, but their bodies were later removed, according to the history.

Hines said restitution money from the government paid to expand the building. A vestibule and balcony were added, and the windows were improved.

Later, Richard Peele gave a piece of land, which he had inherited from his wife through his father-in-law, the same Mr. Goodson who had given the original land, to enlarge the grounds. The cornerstone of the present building was laid in 1898. Additions since then, including a 1963 annex, have featured space for offices and classrooms.

Hines said the church’s rich history is interesting, but it’s the love that keeps people coming back.

“It’s always been a healthy, vibrant church,” he said.

This Sunday’s service will be followed by a potluck meal.

The church is also proud of its annual fall bazaar, a fundraiser that annual draws hundreds from the surrounding community to enjoy lunch, homemade sausage, a bake sale, crafts and an outdoor shop, among other features. The bazaar is coming up this year on Oct. 28 from 9 a.m. to 3 p.m., with lunch from 11 a.m. to 1 p.m.

The church is located at 3109 Providence Road.