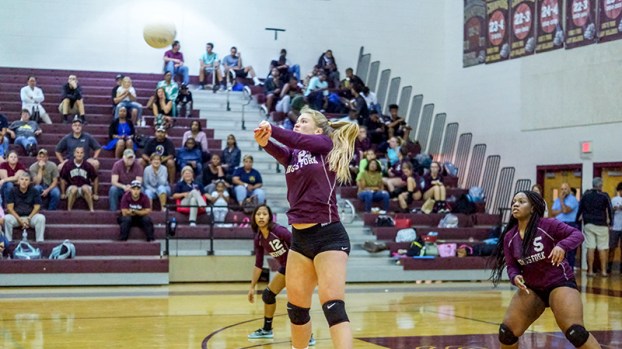 The Lady Bulldogs swept each set 3-0. It was the first win for coach Megan Farabaugh, who took over just a week and a half ago.

“Seeing them win the way they did almost brought me to tears,” Farabaugh said. “I was happy that they were so proud of themselves. It was an awesome feeling. They were cheering each other on the whole game and kept a positive attitude. That is what it is all about.”

Nansemond River didn’t make it easy for King’s Fork to get its first win. They fought hard but ultimately let mistakes get the best of them.

“King’s Fork came to win,” Lady Warriors coach Nikka Gatling said. “They were hungry for a win, and they got it. My girls showed up, but there is still work we have to do. It is a work in progress.”

Starting today, Farabaugh wants to see how her team will build on this win. Zanaya Brown, Jordan Fransee and Imani Urbanski all had productive games for the Lady Bulldogs Tuesday.

“Everyone did their jobs out there,” Farabaugh said. “I’m just so happy for them. They have worked so hard.”

King’s Fork will take on Lakeland High School on the road at 6 p.m. Thursday. Nansemond River will face Hickory High School at home at the same time.

NR golf on to regionals

The Warriors golf team is preparing for regionals after wrapping up its regular season Tuesday afternoon. Jackson Lyons finished the... read more