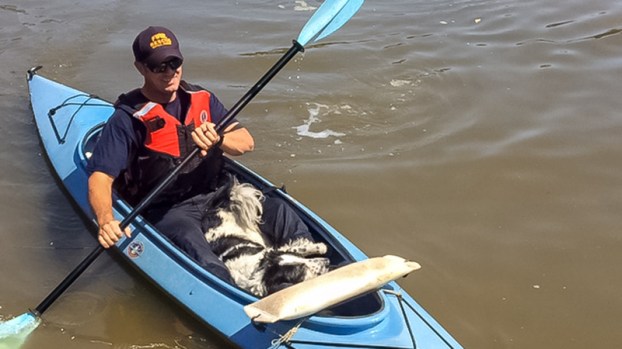 Suffolk senior firefighter Mike Piver paddles 17-year-old Checkers back to shore in a rescue at Lone Star Lakes on Saturday.

Suffolk emergency responders rescued a cherished pet that fell into a dire situation on Saturday.

Windsor resident Debbie Francis took her 17-year-old dog, Checkers, for a walk at Lone Star Lakes Park on Saturday. The two were at the dock on Cedar Lake when the elderly dog fell into the water.

Both deaf and nearly blind, Checkers was in distress and swam towards the center of the lake, Francis said.

“He just kept swimming further and further out in the lake and wouldn’t come back,” she said.

She used her phone to call for park services, her son and 911. Despite poor cell reception at the park, a man and woman by the lake reached 911.

According to Suffolk spokeswoman Diana Klink, Emergency Communications initially received a call that a person was in distress in Lone Star Lakes waters at 12:25 p.m.

More than a dozen emergency personnel had responded to the call, including Suffolk police officers, Chuckatuck volunteer firefighters and Suffolk firefighters, only to learn that it was not a person, but a dog, that needed help.

Suffolk senior firefighter Mike Piver and his crew were one of the last to arrive on the scene. By that point, he said, bystanders and responders were crowded at the shoreline trying to call the dog back to shore.

Francis was watching her dog, who was about 300 yards away. She saw him struggle to get up on a small patch of land where he could rest. He just wouldn’t make his way back.

“They had tried using a police whistle to get him in, but he would just swim a little bit toward us and go back the other way,” she said.

The lake didn’t have a boat ramp, Piver said, but a woman at the lake just happened to have her kayak. She had even brought her own dog with a canine life jacket.

Piver grabbed both and paddled as fast as he could. The dog had been in the water for nearly 45 minutes, and Piver didn’t know that the dog was impaired.

“The first time I grabbed him, he wasn’t very happy with that,” he said. “But we worked things out.”

Piver eventually got the dog into the kayak. Shaking and tired, he eventually calmed down and laid down as the firefighter paddled both of them back.

“I told him I didn’t want him knocking us both over,” he said.

Francis said Checkers was just fine when he got back to shore and is doing well. The 61-year-old was grateful to be reunited with the dog she’s had for about 15 years.

“I was really afraid I was not going to get him back,” she said. “He was so far out, but he saved him.”

She thanked everyone that day for their part in the rescue: The couple that made the 911 call and the firefighters, park rangers and police that came swiftly.

Piver said everyone deserved credit, even though only one of them could fit into the kayak.

“For a lot of people, (dogs) are part of their family,” Piver said. “It’s definitely a good feeling to reunite them. She got to go home happy with a four-legged member of her family.”

An estate sale is set for next weekend for the belongings of former Suffolk Mayor Andy Damiani. Damiani, who died... read more