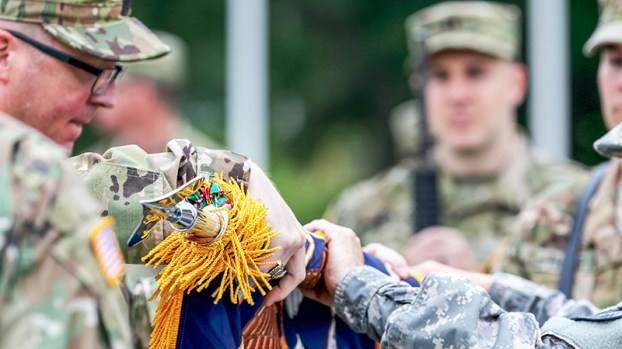 U.S. Army Reserve soldiers from the 98th Training Division roll the colors after the Reserve inactivated eight units during a recent ceremony at Fort Benning, Ga. The units being inactivated dated back to 1917 and 1946, and their soldiers served in numerous operations ranging from World War I to Afghanistan. The 98th Training Division’s commanding general, Brig. Gen. Miles A. Davis, said these units nobly served the nation for generations. Maj. Michelle Lunato/U.S. Army

A U.S. Army Reserve unit based in Suffolk was ceremonially inactivated in July, but Army officials said the change will have little impact on Suffolk.

The 1st Battalion, 317th Regiment out of Suffolk was one of eight U.S. Army Reserve units to be inactivated during a July 8 ceremony at Fort Benning, Ga. The inactivations were “part of a command-wide restructure and realignment to help maintain and increase readiness,” according to a story by the division’s public affairs officer, Maj. Michelle Lunato, posted on the Defense Video Imagery Distribution System.

“It’s just a standard reorganization that we go through from time to time to better align our soldiers so that we’re better prepared to accomplish our missions,” said Col. Michael Ansay, deputy commander of the 98th Training Division. “Time determines how these reorganizations need to occur. This is one that probably should have happened a few years ago.”

Ansay said soldiers in the 317th Regiment would have been coming to Suffolk to drill about one weekend a month.

“Beyond that, soldiers can do much more duty, but that additional duty is unpredictable,” Ansay said. “That’s exactly why we have these units spread out — to make them accessible. Hopefully they’re smartly placed, but it’s getting more difficult with base realignments and closures. Soldiers are tending to travel a whole lot father today to get to a local unit than they used to.”

Brig. Gen. Tripp Bowles, brigade commander in the 98th Training Division, said the Suffolk unit that was inactivated drilled at the 1LT Richard T. Shea U.S. Army Reserve Center on Bennetts Creek Park Road. The soldiers in the unit, numbered about 21 or so, will be assigned to other battalions, Bowles said.

Bowles added that most soldiers in the unit are from the area, so there’s not likely to be a negative fiscal impact on hotels or restaurants in the area.

Other units continue to drill at the Shea Army Reserve Center, Bowles added. The number of soldiers will likely be replaced within the next year.

“Another unit will come in behind them and fill those chairs,” Bowles said. “Really, there’s no loss to the area.”

Ansay said the decision to inactivate the Suffolk unit was not affected by the planned land swap with the city.

The city plans to take over the Shea Army Reserve Center in the summer of 2018 and convert it into a recreation center, according to city spokeswoman Diana Klink on Thursday. In return, the city has given the Army a new site on Carolina Road, where the Army already has commenced construction of a new location, Klink stated.

“They may go on orders for a couple of weeks or several months, depending on the need,” Lunato stated. “Most soldiers in those roles hold civilian jobs as well.”

The inactivated units were praised during the July ceremony.

“These units have risen to every challenge given to them,” said Brig. Gen. Miles A. Davis, the commanding general of the 98th Training Division who presided over the ceremony. “I commend the soldiers and families, past and present, of these units for their hard work, commitment to excellence and service to our great nation.”

Soldiers from the 317th Regiment, which was constituted in August 1917, were mostly men from Pennsylvania, Virginia and West Virginia, and therefore, earned the name “The Blue Ridge Division,” Lunato wrote. These soldiers are recorded to have sailed to Europe with the 80th Division in 1918 and were placed under the British control in the Artois sector. There, they fought in both the Somme Offensive and the Meuse-Argonne Offensive.

Two new Suffolk schools are on schedule to be ready for the fall 2018 semester. Norfolk-based contractor Blueridge General is... read more