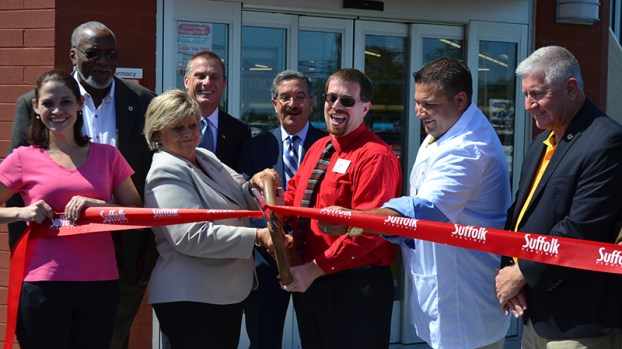 The new pharmacy is at 2775 Godwin Blvd., next to Suffolk Family YMCA. Mayor Linda Johnson, Vice Mayor Leroy Bennett, and Councilmen Mike Duman, Roger Fawcett and Lue Ward were on hand with CVS management and staff.

Johnson spoke about the comments she kept seeing on Facebook from citizens anxious for the new pharmacy.

“This is a thriving location,” she said. “They’re going to get so busy they won’t know what to do.”

Ashland Construction Company broke ground on the building in March, which features more than 12,000 square feet of retail space. District manager Paul McCormick said 18 of the store’s 22-person staff have been hired so far.

“We’re thrilled to be in the Suffolk community,” McCormick said. “We’re very excited that we finally found a spot for one of our stores.”

The pharmacy is located across from Sentara Obici Hospital and near numerous businesses that draw traffic on Route 10. Duman cited the significance of bringing Suffolk’s first CVS to this corridor.

“This corridor has really taken off in the last 10 to 15 years, and you’ve got a lot more rooftops coming,” he said. “It’s notable to receive it in this area, and it speaks volumes for the growth that’s expected.”

CVS purchased the property early this year from the YMCA, which used the sale to help fund $3.5 million in renovations and expansions for the neighboring Suffolk Family YMCA. District vice president Rick Matthews said the improvements are expected to finish mid-October, followed by a grand opening on Nov. 16.

The 24-hour-pharmacy will be convenient for gym members to grab a sports drink or power bar as they head to the gym next door.

“We’re looking forward to being a good neighbor in the community,” McCormick said.

A U.S. Army Reserve unit based in Suffolk was ceremonially inactivated in July, but Army officials said the change will... read more