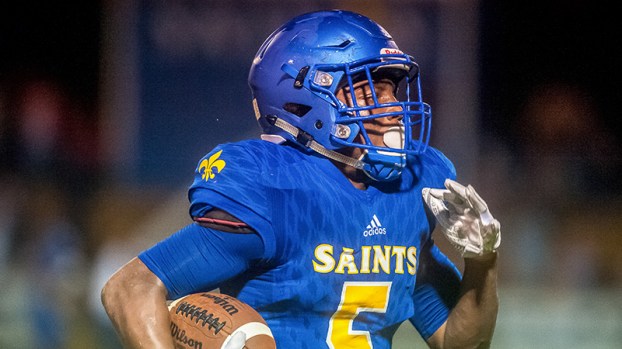 Ehron Knight was voted Suffolk News-Herald Player of the Week after a big performance for Nansemond-Suffolk Academy that included him scoring the game-winning touchdown. Sam Mizelle Photo

Knight has a knack for making plays

Ehron Knight was voted Suffolk News-Herald Player of the Week after his performance against Isle of Wight Academy last weekend.

Knight is a junior two-way athlete for the Nansemond-Suffolk Academy football team. Against IWA, he had 10-plus tackles to go along with 100-plus yards receiving and the game-winning touchdown to give NSA its first win.

After seeing 0-3, Knight knew his team needed a win, so he did what he could to make sure that happened.

“Our team needed the win,” he said. “I’m just glad I was able to help seal the deal. The beginning of the season was tough, but we have improved each week. I feel like we are finally getting into a rhythm.”

When Knight is on the field, he is motivated by his dad. His father was an all-state player at Gates County High School in the late ’80s. He pushes Knight to perform at the highest level in everything that he does. Knight lives in a very competitive household, so his goal is to hopefully be a better football player than his dad was. He described it as “friendly competition.”

Just like his father, Knight is an all-state player as well. As a sophomore, he was a first-team all-state receiver. Now in the midst of his junior year, he hopes to become an all-state player again. His ultimate goal is to play at the college level. The Saint also draws inspiration from the rest of his family. At any cost, he does not want to let them down.

A fierce competitor on the field, Knight, makes sure he is bringing the best out of his teammates at all times. He is a hard worker who respects his coaches and teammates. Preparation is important to Knight. He likes to analyze the game as often as he can so he can improve as a football player. Over the summer, he lifted four days a week and did speed and agility training with a trainer.

In his spare time, he often has his head in his books. If he is not doing that, he is playing video games or hanging out with friends or family.

Knight and the NSA football team will be in action this Friday on the road against St. Anne’s Belfield School.