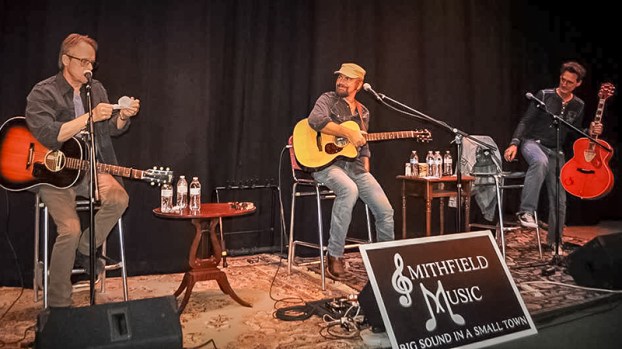 Jack Sundred, Mike Aiken and Paul Jefferson take the stage for the Songwriters in the Round during the 2016 Aiken and Friends Music Fest.

Enjoy some great music while supporting Isle of Wight music programs during a weekend of concert festivities in Smithfield.

The 12th annual Aiken and Friends Music Fest held by Smithfield Music will be at Smithfield Little Theatre at 210 N. Church St. this Friday and Saturday. Crowd-pleasing musicians fill the weekend schedule, along with workshops, classes and food.

Smithfield Music arranges concerts throughout the year in partnership with Smithfield Little Theatre. The proceeds for this festival will support music education programs in Isle of Wight County.

“This is the biggest event that we do for Smithfield music, and we’ve got some great music coming,” said Smithfield Music co-director Jim Abicht.

Mike Aiken, Linda McRae and Ken Tizzard will perform Friday night at 7:30 p.m. Their “songwriters in the round” segment allows the performers to interact with the audience and share the stories behind their music.

Gratiot Lake Road, Susan Greenbaum and Lewis McGehee will perform on Saturday starting at 3:30 p.m. There will also be three different music workshops that afternoon, and Q-Daddy’s Barbecue will be selling their delicious menu.

A 1981 Martin D-28 guitar will be raffled off, which was donated by local resident Margaret Jones. It had belonged to her late husband Butch Jones, according to Abicht.

“Her husband passed away about a year ago, and she wanted the guitar to be put to good use,” he said.

Abicht said the popular festival has allowed his organization to provide about $70,000 for music education programs over the years, the bulk of which has gone to Isle of Wight public schools.

“It’s just a neat festival that this area doesn’t get too often,” he said. “Tidewater gets a concert any given night, but with this, it’s like everyone gets a backstage pass. You get to know the artists, and you’re going to feel like you’re best friends by the time the show is over.”