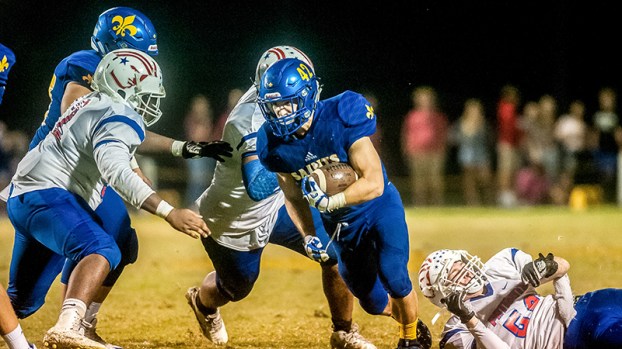 Benjamin Koppelman seeks a hole in the defense during the Saints’ game against Portsmouth Christian School at home on Friday night. Sam Mizelle Photo

Saints make it two in a row

The Saints football team got its second win of the season after a shootout against Portsmouth Christian School at home Friday night.

Nansemond-Suffolk Academy’s football team has now won two games in a row. This is the first time the Saints have won consecutive games under coach Mike Biehl’s direction.  Portsmouth Christian came into the NSA game with a 2-1 record and a potent offense. But NSA wanted to make sure they matched whatever offensive performance Portsmouth Christian decided to display Friday night, and they did that with a 50-43 victory.

NSA and Portsmouth were tied at 14 after one quarter. NSA got things started on the scoreboard after a 64-yard touchdown pass from Robby Tew to Ehron Knight. Portsmouth scored 14 points after that, and NSA scored to close out the quarter.

The Patriots owned the second quarter, as they scored 14 points to the Saints’ seven. At halftime, Portsmouth Christian held a 28-21 lead. In the third quarter, NSA exploded for two 50-plus-yard touchdown while mostly holding Portsmouth in check.

The fourth quarter proved to be NSA’s most productive quarter. An 11-yard run from Ben Koppelman and Zac Morris’ third touchdown of the night put Portsmouth Christian away and gave NSA their second win of the season.

“It was a good one. It was another crazy one for us,” Biehl said. “It was a battle. It came down to which defenses were going to make a stop first. Luckily our team was able to make more plays than they did. My hats are off to them.”

Biehl feels that his offense has the talent and firepower to win a shootout with a team as they did Friday night.

“The offense is starting to click, and we are trying to get even better from here,” Biehl said.

Tigers too much for Cavs