Isle of Wight County law enforcement are investigating the double homicide of an 80-year-old woman and her 58-year-old son that was discovered Saturday and seeking two vehicles that were missing from the residence. 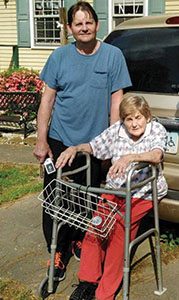 Kenneth and Nancy Starnes were the victims of a double homicide discovered this weekend.

Nancy Starnes and Kenneth Starnes were discovered dead in their home in the 4000 block of Ennisdale Drive in the Rushmere part of Isle of Wight County. Family members went to the home to check on them after having not heard from them and becoming concerned, according to a press release from the Isle of Wight County Sheriff’s Office.

They went to the home and saw signs of forced entry, so they called the sheriff’s office. Deputies responded, went farther into the home and discovered the bodies, according to the release.

Both appeared to have died as a result of gunshot wounds, according to the release.

Two vehicles owned by the Starnes family were not present at the home and cannot be accounted for.

One of the vehicles missing from the residence is a gray, 2010 Ford F-150 Crew Cab four-door pickup truck. Its license plate is KFJ-6882.

The other vehicle is a gold, 2001 Chrysler Town & Country LX van. Its license plate its M4354 (handicapped).

The van has a white Veterans of Foreign Wars Post 8545, Smithfield, VA bumper sticker on its rear passenger side. The van also has tape around the driver’s side brake light and driver’s side view mirror.

First Citizen to be honored Tuesday

Suffolk’s 2017 First Citizen is too humble to say much about the many community service efforts in which he has... read more