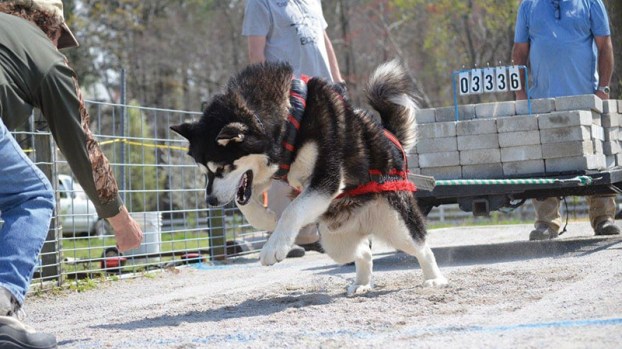 Delbert, a 3-year-old, 150-pound Giant Alaskan Malamute, pulls his weighted cart at Epps Farm Supply in Suffolk during the 2016-2017 season of the International Weight Pull Association.

Ruff competition for dogs in Suffolk

The 2017-2018 season for an international league of competitive dogs and their owners began on Labor Day, and the next Suffolk competition is set for next month.

The Mid-Atlantic Weight Pullers competition will be held at Epps Farm Supply on Joshua Lane on Oct. 7 and 8. The competition is part of the International Weight Pull Association, a nonprofit that promotes the dog sport in organized, safe and family-friendly events.

Another competition is scheduled for the same location and times on Nov. 18 and 19.

Each participating dog must pull a sled or cart weighted with cinder blocks 16 feet within 60 seconds, according to IWPA rules. There are eight different dog weight classes, from 20 pounds and under to more than 151 pounds. The winning dog is decided by the most weight pulled in the shortest time.

According to Debbie Lee, Tidewater regional representative for weight pulling, owners must always have their dogs under control, and absolutely no cruelty is tolerated.

“This is just another avenue for us crazy dog people to have fun, but at the end of the day it’s what the dog wants to do,” Lee said. “They always decide when they want to stop. It’s all up to them.”

Previous weight pulling competitions at Epps Farm Supply have drawn dozens of canine competitors and spectators. Lee described this as a close-knit group of dog lovers with a wide-range of breeds represented, from poodles to Lee’s 3-year-old, 150-pound Giant Alaskan Malamute named Delbert.

The owners have partnerships with their dogs built on strong and rewarding bonds, and the dogs get the best possible food, care and training, Lee said.

“These dogs are just like people,” she said. “Every one of them has a different personality, and it’s about figuring out how to push them.”

Lee has been training dogs for 24 years and is an official judge for the IWPA and the United Kennel Club. She also raises several other dogs along with Delbert, including a Dutch shepherd, a mastiff/Great Dane mix, and a Jack Russell terrier.

She joked that her weight-pulling dogs get so excited that they may even miss a meal.

“If I pick up a chain before they eat dinner, nobody is going to want to eat, because they don’t want to miss the bus,” she joked.

Weigh-ins will be held from 8 a.m. till competition starts at 9 a.m. both days. Spectators pay no fee, while it’s $15 for the first dog entry and $10 for each additional entry.

The first Lidl grocery store in Suffolk will have its grand opening this Thursday, and customers will be offered incentives... read more