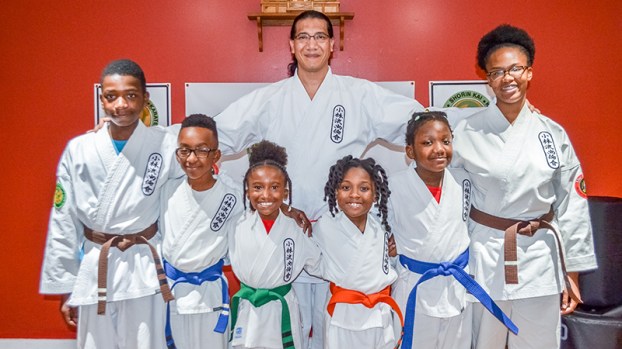 Young Suffolk martial artists recently competed against nationwide opponents, and one of them even emerged with her first grand championship victory.

Students of The Dojo Mount Everest Karate Studio on Eclipse Drive competed in the sixth annual Old School Fall Classic U.S. Open Karate Tournament held at I.C. Norcom High School in Portsmouth on Sept. 16. Teams across the country traveled to the high school to showcase their skills and impress the judges.

Alaina advanced to win her first junior grand championship title and walk away with a 5-foot-tall trophy. Carlos Rivas, karate master at the Eclipse karate studio, described how emotional Alaina was when she was announced as one of the grand champions. 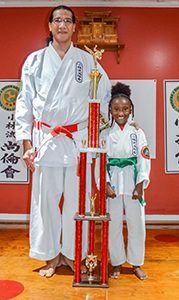 “They were tears of joy,” Rivas said.

Alaina just needed to place first in one of the competitions to advance. She bested 11 other children with her kata performance.

Rivas said he convinced his pupil to choose kata for the grand championship trials instead of weapons. The old Grand-Masters that judged the children preferred kata, he said.

“It was very nice to see the unity between the old masters,” he said. “I told my students that they were looking for internal power, and they really showed them. The kids got a lot of compliments from the masters.”

Alaina was joined by six others from The Dojo at the competition.

“That team motivated her to train even harder,” he said.

The students train for 10 hours each week, including weekends. Sydnee’s mother, Miki Young Brown, was enthusiastic about how this has benefited her daughter.

“This has helped her with self-control and staying focused,” Brown said.

The students will be visited by ninth-degree grand master Keishun Kakinohana from Okinawa Oct. 23-28, along with ninth-degree black belt Mark Greville from Australia, a friend of Kakinohana’s.

“The kids will learn some of the old ways of karate,” Rivas said. “It’s going to be a different flavor for them.”

Ruff competition for dogs in Suffolk

The 2017-2018 season for an international league of competitive dogs and their owners began on Labor Day, and the next... read more