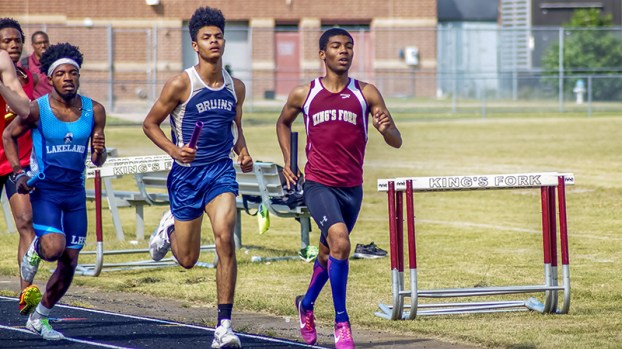 The Bulldogs placed third out of nine teams Tuesday in the third district meet at Bells Mill Park. King’s Fork got a new personal record from top runner Shamond Smith, who ran a time of 17:38, good for sixth overall in the meet. Tyler Gray and Marcus Ramos both finished within the top 20 as well.

“There was some pretty significant improvement from some of our guys in the back end, which will be good for us when regionals come,” Bulldogs coach Steve Sheppard said. “We still have work to do.”

Sheppard’s goal for his team is to earn a state meet berth. He feels if his team continues to progress from meet to meet, he can see that happening. All teams reach regionals, but only three earn a state berth this year. Sheppard was expecting somewhat of a rebuilding year for the Bulldogs, but instead, they are ahead of schedule. Regionals will start Oct. 31.

“I feel like we are on track to be where we want to be,” Sheppard. “We have some progress to make and some big meets we will be at over the next few weeks that will show us where we are. I like how our season is panning out.”

On the girls’ side, Sheppard believes that as the girls start to form an identity, they will surprise some people.

Embracing discomfort is a big key to being successful in long distance running. The Bulldogs’ training and practicing programs are built to push runners through the pain. Sheppard refers to the difficulty that kicks in during practice and meets as the “pain cave.”

“I always tell them guys when that feeling hits, you’re in the pain cave,” Sheppard joked. “I tell them that is where we live man, we live in that pain cave. You have to learn how to embrace it.”

King’s Fork will have another meet at 5:30 p.m. Tuesday at Bells Mill Park.

Nansemond River’s and Lakeland’s boys’ teams finished seventh and eighth, respectively, at Bells Mill Park. Alistair Ortiz was the top finisher for the Warriors, and Leverone Tucker was second.

Rachael Brinkley was the top finisher for Lakeland.

Lady Saints off to strong start

The Nansemond-Suffolk Academy field hockey team is off to a strong start this year with a 6-1 record. The Lady... read more