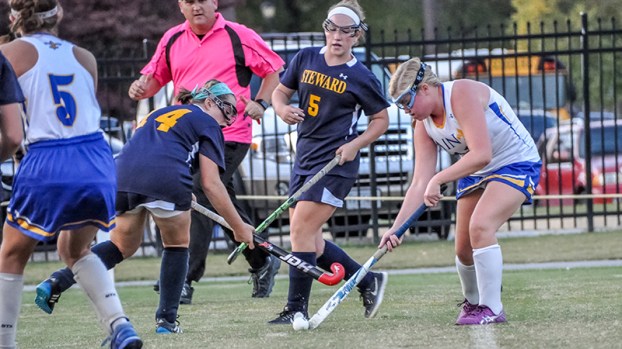 Sam Williams tries to make a play for the Lady Saints. The Lady Saints were ranked No. 4 in the VISAA Division II poll for field hockey. (Lisa Meyers photo)

Lady Saints off to strong start

The Nansemond-Suffolk Academy field hockey team is off to a strong start this year with a 6-1 record.

The Lady Saints picked up a win Monday afternoon against Norfolk Collegiate to give them their sixth win of the season. NSA coach Shelby Bourn said it was the best game her team played this season.

“They definitely played really well on the road,” Bourn said. “The only thing I would say happened was giving up a late goal in the last two minutes. Other than that, we played great.”

Morgan Morrell scored both goals for the Lady Saints Monday afternoon. Sam Williams assisted on the first goal, and Karley Wetmore assisted on the second goal. Kirtley Arnold played a strong game from the midfield.

It was the first game the Lady Saints had played on turf after playing most of their games this season on grass. Sometimes that transition takes an adjustment period, but the Lady Saints didn’t seem to have that issue.

Because of NSA’s strong start, the team is ranked No. 4 in the Virginia Independent Schools Athletic Association Division II field hockey poll for this week.

Bourn feels completely comfortable with her players now, as they are with her as well. Over the last couple of weeks, the Lady Saints have been able to bond and grow closer as a team with their first-year coach. At practices, they put emphasis on playing as a team.

“They definitely deserve to be ranked,” Bourn said. “They are a really good team. I expect us to compete with some of the teams ranked ahead of us when we play them as well. I think we reached a point where we know where we are at and that we feel good about each other.”

“We have been playing great,” Lady Saint Lauren Myers said. “We have worked very hard at practice. We put the good practices we have and showcase them in a game.”

NSA will play again at home against Southampton High School at 4:30 p.m. Oct. 4.

The Lady Saints bounced back from their loss last week with a win on the road Monday afternoon against Peninsula... read more