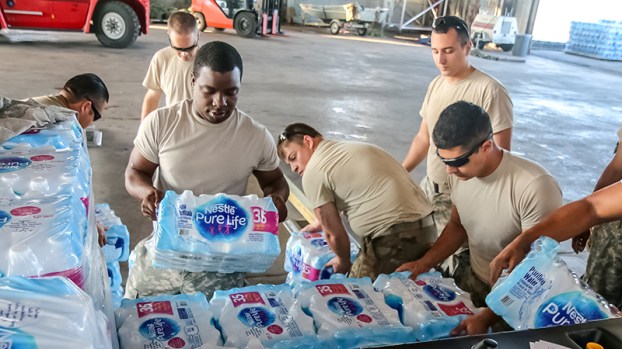 Soldiers from the 116th Infantry Brigade Combat Team load bottled water to take with them to the U.S. Virgin Islands, where they will spend 30 to 60 days helping the U.S. territory recover from recent hurricanes. Army National Guard photo

Soldiers from a Suffolk-based Army National Guard unit were among more than 350 that deployed to the U.S. Virgin Islands early this week to aid the response to recent hurricanes.

The Virgin Islands were hit hard by hurricanes Irma and Maria. The Virginia soldiers from the 116th Infantry Brigade Combat Team were planning to be used in whatever capacity needed but were planning to distribute food, water and other supplies, help clear debris and provide security.

Lt. Col. Stephan Ruppel-Lee, commander of the Bravo troop, said about 55 or 56 soldiers from the Suffolk unit were among the contingent.

“We think the two primary missions we’re going to have … are removing debris and distributing supplies — water, food, tarps, those kinds of things,” Ruppel-Lee said.

He said the soldiers were assigned to be gone for 30 days but were preparing for anywhere between 30 and 60 days.

In an emergency situation, the deployment came together very swiftly.

“They were notified Thursday night and were in the armories Saturday morning,” Ruppel-Lee said.

Despite the short notice, the soldiers were excited to go.

“My feeling talking with the guys is that they’ve come in all excited and motivated,” Ruppel-Lee said. “I’m amazed how excited they are to be of use and of help to other people.”

In fact, the soldiers who didn’t get to go were disappointed, Ruppel-Lee said.

“I am proud of the guys for jumping up and getting here in short order,” he said. “That’s totally reasonable. I’m absolutely as proud as I can be of the guys’ willingness to help their fellow man.”

The soldiers departed from Blackstone Army Airfield in Blackstone to join the multi-state, multi-agency response to the hurricanes that battered the Caribbean, including U.S. commonwealths and territories like Puerto Rico and the U.S. Virgin Islands.

Advance teams from the 116th were on the ground beginning Sept. 18, just before Hurricane Maria made landfall.

Going into an area that had damaged infrastructure and is short on supplies created a significant logistics challenge with the 116th needing to take everything it would need to conduct operations, Lt. Col. Jared Lake stated in a press release. Basic needs like food and water had to be packed, as well as computers, maps, overlay material, tables, chairs, generators and tents to conduct mission command. They also had to prepare vehicles and equipment for the support mission as well as taking repair parts and other maintenance items.

“I am incredibly proud of how quickly and safely the soldiers of the 116th Infantry Brigade Combat Team have come together in order to get much-needed assistance to the U.S. Virgin Islands, and that pride is amplified by the fact that these soldiers volunteered to go,” Maj. Gen. Timothy P. Williams, the adjutant general of Virginia, stated in a press release. “Our soldiers have left their jobs and their loved ones on very short notice to undertake a noble cause, and they couldn’t do that without the critical support at home and at work. I want to extend a very special thanks for their continued support that is so important to what we do.”

A Suffolk church will hold its first blessing of the animals service this Sunday. The Rev. Julie Sterling, the new... read more