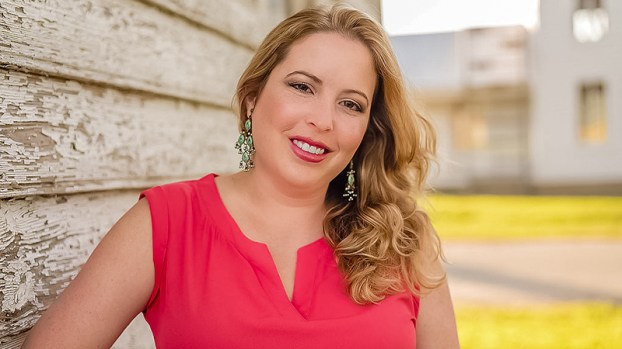 Shana Hollowell, a Suffolk resident and mother, wrote “Little Mouse’s Sweet Treat” after she made up the story to tell her son. She published the book to rave reviews and already has completed two more. Maggie May Photography

Suffolk resident Shana Hollowell has been published in scientific journals, but she took a significant departure from that in her first book.

Hollowell’s new creation is a children’s book titled “Little Mouse’s Sweet Treat.” It features Mouse on an adventure looking for something sweet to eat. Along the way, Mouse meets his friends, Bear, Bunny, Dog, Cat, Bird, Pony and Cow, and they all offer him their favorite treats, but none of them are quite right. He is disappointed until he arrives home and realizes his mom baked cookies just for him.

“It’s a fun, easy read that resonates with toddlers, preschoolers and kindergarteners,” said Hollowell, who is from Windsor originally and moved to Suffolk about three years ago. “Children can really relate to it, it has the love of little mouse’s mother, which is reassuring, and it has cookies, which is a relatable treat for children that age.”

She got the idea for the book after she had her first son, who had colic and wasn’t able to nap much while she was at home with him.

“Instead of dwelling on him having colic, I was trying to focus on something enjoyable we could do together,” she said.

She decided to read him books but wasn’t pleased with many of the children’s books she found, so she decided to make up her own stories instead.

“It helped me stay creative and motivated while I was on maternity leave,” she said.

The story started when her son started carrying around one of the cat’s toys, a little stuffed mouse.

Hollowell wrote the story in short, rhyming stanzas, so it’s easy for parents and teachers to read.

Hollowell said the book is getting good reviews online and from local kindergarten classes where she has been invited to read. She has been contacted by other elementary schools as well.

“To me, that’s the best part,” she said. “They’re so energetic and engaged in the story.”

She has completed two more books featuring a squirrel and a raccoon. Finch is illustrating them currently, she said.

Suffolk welcomed its first Lidl grocery store with a ribbon cutting ceremony on Thursday, after which the grocer greeted its... read more