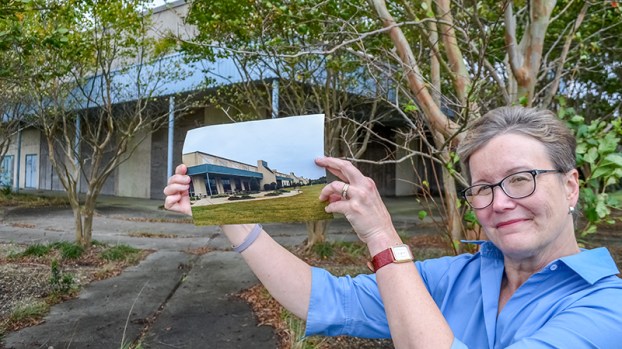 Marian Anderfuren, vice president of communications for Tidewater Community College, holds a photograph of the Beazley Building that shows how it looked for students and visitors before TCC ceased classes at the North Suffolk campus in 2010.

As faculty and friends of Tidewater Community College say goodbye to the landmark Suffolk campus, a search is under way for memories and photographs of the early years at the original campus.

TCC Real Estate and Educational Foundations will host a “Frederick Campus Farewell” on Oct. 7 from 9 to 11 a.m. Alumni, faculty and residents will drive to the end of College Drive off I-664 and meet at the parking lot of the Beazley Building to share campus stories over coffee and snacks.

The building is scheduled for demolition this October, according to Matthew Baumgarten, executive director of TCC Real Estate. Baumgarten said demolishing the building and other nearby structures will prepare the property for future redevelopment.

“We’re working on a development strategy plan with the city to figure out the best use for Suffolk and South Hampton Roads,” he said.

The 200,000-square foot building was named after local philanthropist Fred W. Beazley, who closed the existing Frederick College on the site and deeded the property to the Commonwealth of Virginia to found TCC’s Frederick Campus in 1968.

The campus was renamed the Frederick W. Beazley Portsmouth Campus in 1986 to represent ties to the Portsmouth-based Beazley Foundation.

Terry Jones, the final provost of the original campus who aided in the relocation to the new Portsmouth Campus at Victory Crossing Business Park in 2010, said the Suffolk campus wasn’t just for students.

“It was very much a community center for a lot of different activities,” Jones said.

Theater productions, rock-and-roll festivals, and even a waterside view of Halley’s Comet drew both residents and students to the campus for 50 years. But there aren’t many records or photographs of those experiences.

“We don’t even have a good picture of our first president,” said Marian Anderfuren, associate vice president of communications. “We just have a news clipping of him, but it’s very grainy.”

The college wants to collect stories and photographs that illuminate the history of the campus. Those that have memories to share can then meet at their former community hotspot on Oct. 7.

“We want to tap that feeling of Fredrick Campus being the place you used to go,” Anderfuren said. “Lots of people have a connection to this campus, even though they might not have attended the college. I hope that some of them will want to come back and relive some of those good memories.”

Memories and scanned photographs be submitted by filling out the form at www.tcc.edu/frederickcampus, or go to the website to find out more information.

Suffolk welcomed its first Lidl grocery store with a ribbon cutting ceremony on Thursday, after which the grocer greeted its... read more