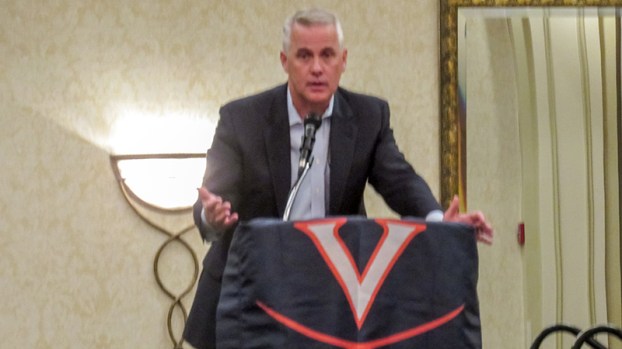 University of Virginia baseball coach Brian O’Connor was the special guest speaker at a UVA sports event in Suffolk on Wednesday. O’Connor coached UVA to a NCAA National Championship in 2015. He has also been named National Coach of the Year three times.

O’Connor was the speaker this year at the annual event coordinated by Suffolk’s own Billy Chorey Sr. In previous years, the event hosted UVA football coach Bronco Mendenhall, among others.

While in Suffolk, O’Connor touched on a number of topics from recruiting to Major League Baseball and how it correlates with college baseball players.

In baseball, players can go professional right after high school. So, when it comes to recruiting for O’Connor, he doesn’t focus as much on top talent, because he never knows for sure whether a player would play for his program with the prospect of an MLB career looming. He also spoke about how he didn’t think it was conducive for his program to over-recruit, because of the fear of losing players to the pros.

“If we feel a player is not engaged enough to come to college and just wants to go pro, we are not interested,” O’Connor said. “Some of our competitors may over-recruit, and if they have guys from that class go pro, they are fine. However, if you over-recruit and all those players come to school, you’re stuck figuring out how to keep them all with a limited amount of scholarship money. It’s challenging.”

In 14 years, O’Connor said, he has never had a full-scholarship player. A lot has been said over the last few years about college athletes getting paid, and O’Connor feels like they are granted more than they need.

“I think we are giving them an unbelievable education along with trainers, tutors and academic support people who are doing all these things,” he said. “I’m on the other side about it.”

If a player decided to go play baseball in college and then go pro, they will have had to compete three years’ minimum. O’Connor feels that is a good system, because it forces players to be 75 percent done with their degrees. He also joked how some of his players have signed million-dollar contracts, and he is still waiting on his 10 percent.

At UVA, O’Connor has been a part of the baseball program for 14 years. He has led the Cavs to 14 straight NCAA tournament appearances. Out of the 14 appearances, they have seven NCAA regional championships and two ACC championships.