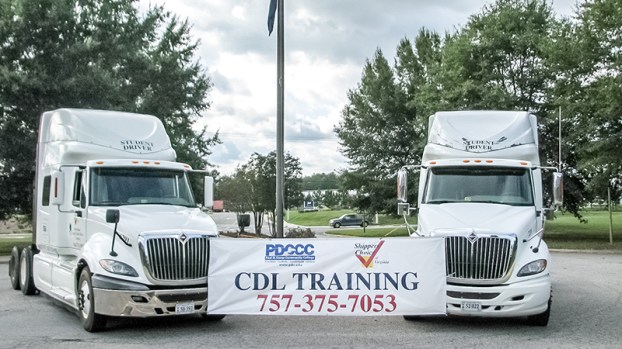 A couple of big rigs in the parking lot at Paul D. Camp Community College on Wednesday advertised a new truck driver training program during an open house for the program.

A new training program for truck drivers offered in Suffolk promises a quick entry into a career opportunity that is growing in this area.

The four-week program is being offered at the Suffolk campus of Paul D. Camp Community College in partnership with Shipper’s Choice. Students attain a Class A Commercial Driver’s License upon successful completion of the course.

“We know there is a huge demand in this area,” said Angela Lawhorne, workforce development director for Paul D. Camp.

Students get 80 hours of classroom training in the first two weeks of the program, during which they obtain their CDL learner’s permit and receive the required physical right there at the college campus.

The need for a learner’s permit before entering other programs is sometimes an issue that prevents students from attending, said college Vice President for Institutional Advancement and Workforce Development Dr. Renee Felts.

“We’ve removed some of the barriers we’ve seen in other programs,” Felts said.

The second half of the program features behind-the-wheel training at a facility off Carolina Road, where students will be bused from the Suffolk campus on Kenyon Road.

Shipper’s Choice Director of Education Ed Henk said the program is perfect for the Suffolk area. The company already has six other locations at community colleges throughout Virginia.

“It really opens up this area,” he said. “There is a lot of need in this area, because it’s grown. This program has taken off 10 times faster than what any of us had planned. I think it’s going to be a good relationship.”

The first section of students is going through the class now. More classes are planned starting every four weeks.

An open house was held to celebrate the partnership at Paul D. Camp’s Suffolk campus on Wednesday, and several potential students registered on the spot. Alonzo Rawlings and Leon Stewart were among them.

“I always wanted to learn how to drive trucks,” Rawlings said. “I’m ready.”

Suffolk Economic Development Director Kevin Hughes was among those who attended the open house.

“We’re responding to a need in the community,” he said.

The full tuition cost for the program is $4,500, but for any student who is at least 18 years old and has lived in Virginia for at least a year, the tuition automatically goes down to $1,500 thanks to a workforce grant.

Income-based tuition assistance is available for students who meet federal poverty levels on a sliding scale, which takes up to 90 percent off the remaining cost.

For more information about the program, email workforce@pdc.edu or call 569-6050.

Voters in one Sleepy Hole Borough precinct will need to go to a different location to cast their ballots this... read more