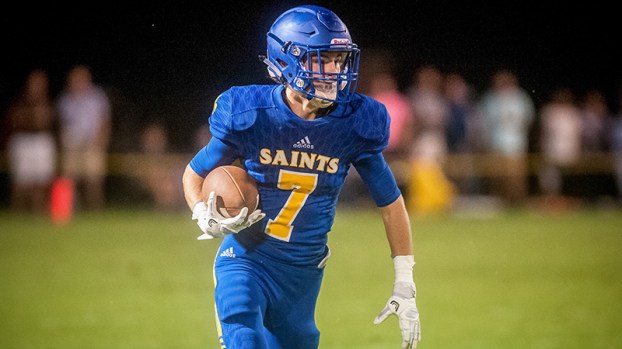 Zac Morris was voted Suffolk News-Herald Player of the Week after a three-receiving touchdown performance in a Saints win over Portsmouth Christian. Sam Mizelle photo

Zac Morris was voted Suffolk News-Herald Player of the Week after a three-touchdown performance last week in the Saints’ win over Portsmouth Christian.

The Nansemond-Suffolk Academy football team has scored 35 or more points in three straight games. The Saints’ high-rolling offense has benefited mightily from Morris’ nose for the end zone.

Against Portsmouth Christian last week, he scored three touchdowns as NSA put up 50 points. He also got things done on the defensive side, with nine tackles and several pass breakups. In the past two games, he has five touchdowns combined. It is clear Morris can make plays.

“It was an overall good team win,” Morris said of the Portsmouth Christian game.

“Our offense is really starting to click, and I’m just doing my part to keep us moving forward. We came together as a team. We don’t want to accept defeat. We are finally believing in each other and are starting to play to our full potential.”

Morris, a junior, has made his way back to the field this year after missing essentially his whole sophomore season because of a shoulder injury. Against Norfolk Christian, a screen pass had gone down the sideline, and Morris chased it but fell awkwardly on his shoulder.

He let the anticipation of returning to the field this year motivate him. His goal for this season was just to be free of injuries . During the summer, he worked with coach Mike Biehl to lift weights and rebuild strength in his shoulder.

The biggest obstacle for Morris was his impatience. It was not so much the healing process as it was not being able to be on the field with his team.

“I had been waiting forever to get back on the field,” he said. “I’m just glad I’m back and contributing to my team. Personally, the toughest part was watching my team out there and me not being to help on the sideline.”

The junior’s father has always been an inspiration, on and off the field. Morris considers him a great role model and someone who has inspired him since he was little.

The Saints standout describes himself as a fiery competitor. He feels he has something to prove every time he steps onto the field. Biehl said that not many knew much about how good a player Morris was, except for those at NSA. But the coach knew Morris could make plays from Day One.

“He is great in the slot, and when defenses try to take Erek Smith and Ehron Knight away, he makes plays every time,” Biehl said. “As one of our safeties, he also makes plays on the defensive side of the ball, as well.”

When he is not around any sports or the classroom, Morris can be found hanging with friends.

NSA will have a bye week this week before Morris and the Saints return next week for their homecoming game.

Are you looking for a winter youth sports league where your child can learn new skills, enhance fundamentals and have... read more