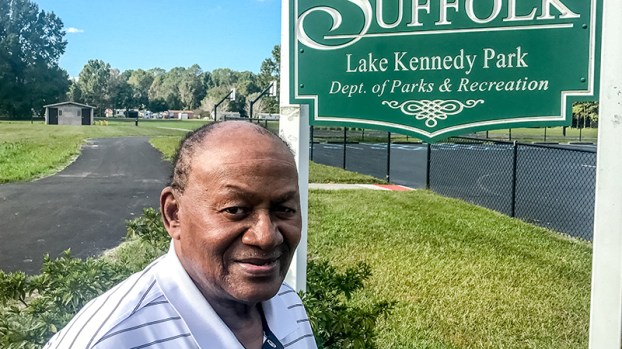 A step forward for Suffolk neighborhood

Suffolk residents worked with Suffolk Parks and Recreation to create a safe exercise space for neighbors and visitors alike.

Residents of Lake Kennedy Neighborhood have been enjoying the new walking trail at their park since substantial construction finished at the end of August. Found at 1300 Blythewood Lane, the eight-foot wide, asphalt path loops around the playground and basketball court, with easy access from the road to make it more convenient for residents.

Trees are also expected to be planted this fall to create more shade along the quarter-mile loop, according to Michael Kelly, Suffolk Department of Parks and Recreation principal planner.

“Lake Kennedy Park is a nice community park, and this was one amenity that we thought would really enhance what was out there already,” he said. “It ties everything together and adds some more connectivity in the park area.”

Lake Kennedy Civic League members had campaigned for the trail so senior citizens could exercise safely without having to commute, according to president George Boykins.

“There was nowhere for senior citizens to exercise daily,” Boykins said. “They wanted somewhere close and not have to walk in the streets.”

The project was funded by a $75,000 grant Suffolk Parks and Recreation received from Obici Healthcare Foundation in June 2016. The department also received an additional $75,000 for a mile-long extension of the Seaboard Coastline Trail in North Suffolk.

Kelly said Lake Kennedy Park was one of several identified in the Suffolk Master Plan to receive an upgrade. A plan for a trail at Bennett’s Creek should be approved in the next several weeks, with construction expected to start this fall.

“It’s all about giving people safe places to walk and play,” he said. “You can skate or ride, and toddlers can learn to ride their bikes in a safe place.”

Boykins was excited by how much traffic the trail was already getting from neighbors.

“I go past it to pick up a newspaper, and I see people there at 6 o’clock in the morning,” he said.

The trail isn’t just for Lake Kennedy residents, however, as Boykins extended an invitation for citizens throughout the city to stop by for a stroll.

A man police say was driving under the influence of alcohol with three children in the car was among 54... read more