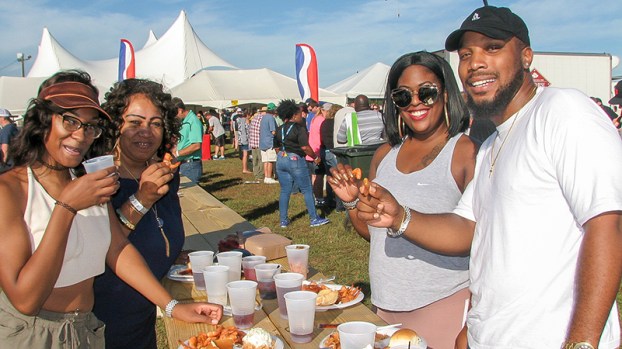 Fine day for a feast

It was a fine afternoon for festival at the Suffolk Peanut Fest on Thursday.

The first day of the festival’s 40th rendition featured fine weather, crowds of people taking advantage of the Carload Night deal and, of course, the Suffolk Ruritan Club Shrimp Feast.

Thousands of folks filled the Shrimp Feast area for shrimp, barbecue, libations, entertainment by the Gator Head Band and good times with friends.

The event was filled with first-timers who complimented the shrimp.

Rod MacDonald, a transplant from Indiana, said the shrimp were “like a hundred times better” than the steamed shrimp he used to get from Piggly Wiggly when he first moved to the South.

Lisa Jennings, another first-timer, said she decided to come to the Shrimp Feast because of its reputation.

“We heard a lot of good things about it,” she said.

Those who were in attendance last year, which featured pouring rain that soaked people and their plates, said their favorite thing about Shrimp Feast was the good weather.

“I’m most excited about the weather,” Mike Constant said.

Co-chairman Dave Walker had to agree.

“This is the best weather we could ask for,” he said under sunny skies. “The crowd’s been pretty good, and they’re all happy. We do the best we can. It’s all for a good cause.”

Proceeds from the event benefit community efforts such as other nonprofits and scholarships.

Thousands of festivalgoers will ride carnival rides at the Peanut Festival during the next four days, but few will give... read more