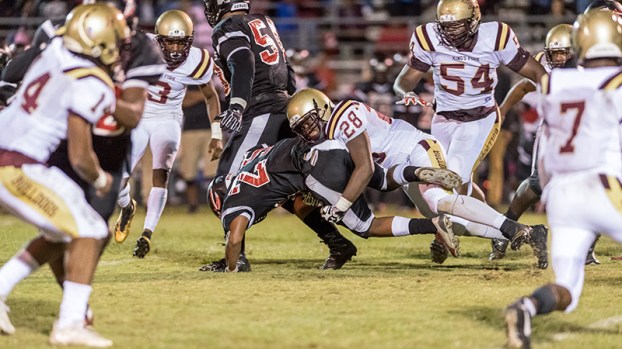 The Bulldogs, Warriors and Cavs will all be on the road this week, and the Saints have a bye.

The Bulldogs will get a chance at redemption as they go on the road to face Great Bridge. Last year, the Wildcats came to Suffolk and spoiled the Bulldogs’ homecoming plans, beating King’s Fork 51-48 in a shootout. King’s Fork is coming off of an impressive 47-7 win over Nansemond River High School last weekend and is looking to keep the ball rolling.

“We have been on a bit of a redemption path here lately,” Bulldogs coach Scottie Littles said. “A couple of our wins have been against teams who beat us last year. This is a unique week for us. We want to make sure we are continuing to do the things we need to do to stay consistent.”

Defensively, Great Bridge offers different formations. Littles knows if he and his team aren’t prepared for them, they can get caught off guard.

“They are going to try to put together trick plays and stuff like that to catch you off guard and set stuff up for them,” Littles said. “But if we do what we are coached to do, we will be fine.”

Darran Butts, Justin German, Chris Shearin and Cherrod Joe are among the big playmakers for the Bulldogs. However, they have also gotten production from the likes of Sam Dunn, Bobby Boone, Jayree Hardy and others. It shows how much talent the Bulldogs possess and how teams can’t focus on just one player.

King’s Fork will be at Great Bridge at 7 p.m. Friday.

The Cavs will face yet another tough test as they go on the road to face an undefeated Deep Creek team. Deep Creek has been playing at a high level for the past few weeks, and the Cavs will try to be the first team to give them a loss this season. 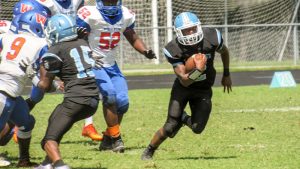 Tyriq Rawlings and the Cavs will look to get back on track against Deep Creek High School on the road at 7 p.m. Friday.

Last week, the Cavs lost 38-31 to Western Branch High School, but the Cavs got an incredible game from Tyquan Holloman, who accounted for five touchdowns. Last year, the Cavs defeated Deep Creek 28-21 at home, and it has been a while since the Cavs have lost to Deep Creek.

“We have a tough task ahead of us,” Cavs coach Kevin Knight said. “Deep Creek has been on fire. We look at it as a great opportunity for us to get back to where we need to be.”

After defeating Wilson High School the first game of the season, the Cavs have lost four games straight, ranging from close games to a couple of blowouts. The record isn’t indicative of how hard the Cavs have been playing. Two of Lakeland’s losses, to Nansemond River and Western Branch, have been by a combined 10 points.

In this case, Lakeland is looking forward to being the underdog. To get a win on the road, Lakeland feels they need to be disciplined in what they are doing. Execution is even more critical on the road than it is at home. Special teams will also be a point of emphasis for Lakeland this week as well.

Deep Creek has one of the top runners in the area, so Knight has been preaching to his team to remain disciplined and sound in their run defense. On offense, Lakeland will look to try to continue to make things happen through the air.

Lakeland will be at Deep Creek High School at 7 p.m. Friday

Nansemond River is currently on a two-game losing streak after starting 3-0 on the season. They will have a tough task that all other Southeastern District opponents face when it comes to facing the Tigers. Oscar Smith simply doesn’t lose district games, but the Warriors will try to change that today.

The Warriors will have to play a perfect game all around on offense, defense and special teams if they want to give themselves a chance. Last week, the Warriors weren’t able to get the run game going against King’s Fork. Watch for the Warriors to get the ground game back on track against the Tigers.

Last year the Warriors lost 48-0. Warriors will be at Oscar Smith at 7 p.m. Friday.

NSA is 3-3 in the midst of their bye week. The Saints rattled off three straight wins after starting 0-3. Last weekend, they defeated St. Anne’s Belfield School 48-28. The Saints have been taking the bye week to get a head start on their next opponent and to get healthy.

“So far so good,” coach Mike Biehl said. “Around this time of year, everyone is a little nicked up. We are trying to make sure we are getting ready for our next opponent with mental reps. I think everyone has gone about this the right way, and the guys will be ready to go next week.”

Offensively, the Saints have started to get it going. Freshman George Pettaway has been a handful out of the back field, while playmakers Ehron Knight, Erek Smith and Zac Morris continue to do what they do. Robby Tew continues to build on his performances from the week before, having accumulated for nine touchdowns the last two games.

Former Bulldog Davon Grayson has been putting up solid numbers at wide receiver for East Carolina University. The Pirates are... read more