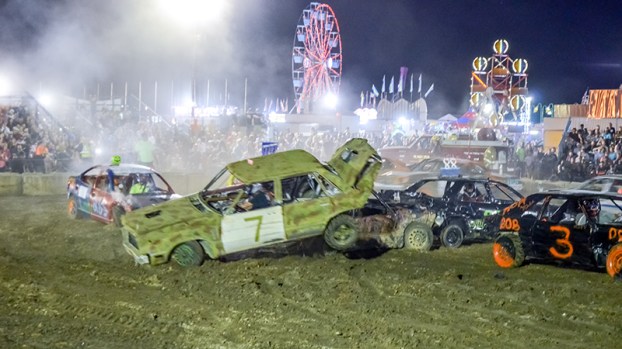 A car takes a strong hit at the Suffolk Peanut Festival Demolition Derby on Friday.

Engines howled and steel cracked Friday night to cheers from packed bleachers. Modified cars went back and forth as they bounced off each other in the dirt, and the crowd responded with each hit.

The Suffolk Peanut Festival’s Demolition Derby draws friends and family each year for an evening of adrenaline-infused competition, and this year was no exception.

“It’s still up there at the top with the best events we got,” said Billy Wyatt, president of the Suffolk Peanut Fest board of directors.

More than 30 cars ranging from compact to full-size were modified according to safety rules. They were stripped to essential, and their gas tanks were relocated. Doors were welded shut to prevent them from flying, along with any other unnecessary parts.

Each heat kept going until a predetermined number of cars remained active. Front-on and driver’s door collisions were forbidden, but all other contact was fair game.

There was no “sandbagging,” and every driver had to make an aggressive move each minute or else be eliminated.

“You just keep hitting ‘til the last one is standing,” said Scotty Buchanan, a driver that’s earned the nickname “The Wrecking Ball” from friends and family.

“You’re pretty much amped all the way until you get the first hit,” said driver Chris Brinkley. “Then you’re into it and try to be more methodical.”

Brinkley has been demolition driving for 17 years, while Buchanan has clocked 19 years. For them and many others, the sport has become a family affair. Two of Brinkley’s children competed for the first time on Friday, and it was the second for his daughter Claire. His friend Buchanan raised his children in the sport as well.

The announcer held a moment of silence before the competition started for Travis Story, a teammate of Buchanan and Brinkley’s who passed away earlier this year due to heart complications. The bond among the drivers was clear.

“We just have a blast doing this,” Buchanan said. “It’s that time that bonds us together.”

Monique Jaegar, one of Buchanan and Brinkley’s drivers, got behind the wheel for the first time on Friday. Her car was one of the last to be eliminated from her heat. The 20-year-old could be seen immediately afterwards jumping with excitement.

“Everything is shaking, but I’m really excited,” Jaegar said. “It was terrifying, but I just hit the gas and reversed.”

Was she ready to do it again?

Fine day for a feast

It was a fine afternoon for festival at the Suffolk Peanut Fest on Thursday. The first day of the festival’s... read more