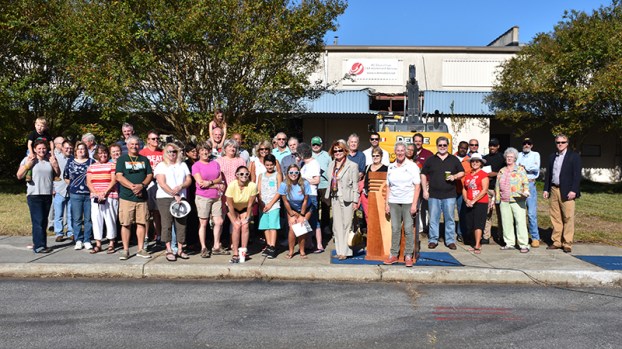 A group of former students and others gathered at Tidewater Community College's former campus to remember old times on Saturday morning.

Alumni and faculty who had been connected to Tidewater Community College’s first campus gathered in Suffolk with friends and family to reminisce and say farewell on Saturday.

The ceremony was a chance for folks to remember good times at the Beazley Building, which is scheduled for demolition this fall.

The 200,000-square foot building was named after local philanthropist Fred W. Beazley, who closed the former Frederick College on the site and deeded the property to the Commonwealth of Virginia to found TCC’s Frederick Campus in 1968.

TCC President Edna Baehre-Kolovani manned an excavator on-site and tore a chunk of paneling from the building facing the crowd in the parking lot.

“I appreciate that they trusted me to do that,” Baehre-Kolovani joked. “It was pretty cool as a symbolic first swipe to demolishing.”

Demolition of the old building and other nearby structures will prepare the property for future redevelopment.

Suffolk Economic Development Director Kevin Hughes spoke at the ceremony about the potential uses for the site. He mentioned the ongoing improvements for the property, such as the construction of a roundabout at the intersection of Harbour View Boulevard and College Drive to address increasing traffic.

Developer proposals are being accepted for possibilities such as businesses and public parks, either of which would benefit from the scenic waterfront view, Hughes said.

“We look forward to wonderful amenities for the city of Suffolk and Hampton Roads,” he said.

For decades, the campus was a bustling site for both students and residents. Theater productions, concerts, speakers and children’s classes drew thousands to the campus regularly.

Alumni could recall when the public came to witness the passing of Halley’s Comet in 1986 using the campus observatory Professor Aubrey Hartman built from an old gun turret. Others remembered when more than 23,000 people came to see the Eagles and J. Geils Band play at the “Raunch & Roll Festival” in 1973.

“This was a lively campus,” said Clarence McCoy, a 1963 graduate that transferred from Frederick Military Academy. “We had a lot of fun.”

Frances Murray was in the first graduating class for four-year students in 1965. She met her late husband Tex Murray at the school, and the two married shortly after graduating. She went on to teach in Suffolk Public Schools for 13 years.

She said the alumni have become a close-knit community, with a 2011 reunion bringing more than 200 former students and their families. There was some somberness at seeing the old building begin to fall.

Jerry Gavin played basketball with Tex Murray for TCC back when music like Kenny Ball’s “Midnight in Moscow” and Jackie Wilson’s “It’s So Fine’”were popular on campus. Gavin remembered with clarity their big Christmas win in December 1963, when they beat Old Dominion University 101-89.

It didn’t take him long to remember the final score.

“We were so high because of that game that we thought we could beat the Boston Celtics,” he said.