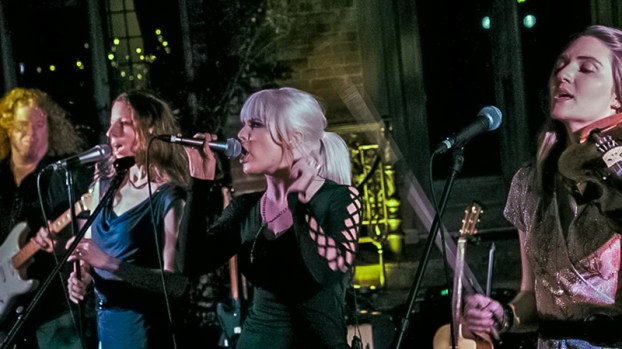 Little Country will be one of the featured acts at the Suffolk Center for Cultural Arts this season.

Beach music, jazz, comedy, country music, musical theater and political satire are among the offerings in the Suffolk Center for Cultural Arts’ 2017-18 performance season, which kicks off this week with “The Capitol Steps.”

“In many ways, the season was programmed by our patrons,” said Executive Director Jackie Cherry. “In the spring, we conducted a survey on our website and at some of our performances asking, among other things, the types of performances people would like to see at the center, and we used those responses to build our season.”

A variety of gallery exhibits also are planned throughout the year.

The work of renowned sculptors William and David Turner of the Eastern Shore of Virginia will be on exhibit at the Suffolk Center through Oct. 21. Both the BB&T and Norfolk Foundation galleries will house the Turner creations in bronze, as well as some of William Turner’s paintings. William Turner’s four published books will be available for purchase during the exhibit. The Turners, father and son, share a talent of capturing the beauty and motion of wildlife in bronze. To date, the Turners have created more than 700 different limited edition bronzes and more than 100 large public commissions found throughout the U.S.

For more than 30 years, the Capitol Steps have put the “mock” in Democracy! Since their beginning in 1981, they have made more albums than the Constitution has amendments. They’ve been featured on NBC, CBS, ABC, PBS, and are heard twice a year on NPR stations nationwide during their “Politics Takes a Holiday” radio specials.

Disney’s “The Lion King” brings the African savanna to majestic life with Simba, Rafiki, Mufasa and an unforgettable cast of characters. Organized in 1984, The Hurrah Players have been recognized by local and regional media and theatrical organizations.

Sit! Stay! Get ready to howl! A Ringling Brothers Clown College graduate, Johnny Peers has been working with dogs since he got his first puppy, Freckles, a rescue beagle mix. The show stars mostly dogs rescued from shelters, like skateboarding basset hounds, ladder-climbing fox terriers, and a dog who only responds to commands in Spanish. Johnny leads more than a dozen dogs through challenging and hilarious tricks.

Showcasing the work of artists chosen through a juried process by the Artisan Center of Virginia. Works on display will be from a variety of mediums and items will be available for purchase, a unique gift-giving opportunity for the holiday season. Information on the extensive state-wide Artisan Trail in Virginia will be available. An opening reception will be held from 5:30 to 7:30 p.m. Nov. 9.

The Embers are widely considered a musical marvel and have laid the groundwork for what has become known as “beach music” in the Carolinas, Virginia, the Gulf Coast region of North America and every beach in between. The Embers consider the genre “music with a memory” and have been creating lasting memories since its inception in 1958. This legendary band sings new arrangements of classic Christmas tunes the whole family will love.

The Malpass Brothers are as authentic as stone-ground grits, hush puppies and chopped pork barbecue — and they’re every bit as good. If you’re not already a fan of classic old-time “real” country music when you take your seat, you will be by the time you leave the hall. As young boys in eastern North Carolina, Christopher and Taylor Malpass soaked up the music of their granddad’s jukebox in his country store. Christopher earned his first talent show trophy at age 7, and Taylor was playing mandolin by the time he was 10. Today, they promote the work and music of classic country artists they treasure while creating new music and making their own mark in the lineage of a rich American cultural heritage.

The Suffolk Center presents the work of Norfolk photographer Glen McClure in “Near and Far, Faces and Places.” The self-taught McClure presents insightful portraits of the folks of Tidewater as they move through their daily life and work. Also an accomplished landscape photographer, McClure will display photographs of moving unpopulated landscapes and work from his travels throughout Scotland and Ireland. An opening reception will be held from 6 to 8 p.m. Jan. 18.

This universal classic and its timeless characters provide the perfect backdrop for this pastiche opera, brilliantly interwoven by John Davies with music by Mozart and scenes by Mozart, Donizetti and Rossini. When three billy goats encounter a big bully goat blocking their way home from school, the billy goats try different strategies to defeat the bully goat.

Shana Tucker is a singer-songwriter and cellist who credits her genre-bending journey to the influences of her jazz and classical roots interwoven with ‘80s and ‘90s pop music, movie soundtracks and world music.

All Laughs Matter to The Blackpack Four comedians. One stage. Celebrating our differences one joke at a time. That’s how The Blackpack — Vince Morris, BT, Billy D. Washington and Louis Johnson — bill themselves. They have been featured on major networks, such as HBO, Comedy Central, Showtime, MTV, A&E, Fox, and BET, numerous times. They use the acronym S.E.L.L.O.U.T. to describe themselves: Serious. Educated. Laughing. Learning. Outrageous. Unique. Talented. The Blackpack has gotten rave reviews from venues where they’ve performed. “Their material is SO spot-on, just to the perfect ‘edge’ in every way — with never going over or too far,” one review noted. “They’re very, very smart in reading their audience, and they do so with humor and warmth.”

Come celebrate St. Patrick’s Day. If Fleetwood Mac, Little Big Town, and Kansas made a band bay, it would be Little Country. This six-piece rock, pop and country cover band is homegrown and based out of Virginia Beach. The members of this band are seasoned musicians, and some come with major tour experience under their belts. With an ever-changing song list, their show is geared towards an all-around good time, packed with modern energetic rock, pop and country, as well as classic sing-a-longs.

Masters of Soul is a celebration of the legendary songs and performers that defined Motown and soul music. This 90-minute show features stylishly costumed, fully choreographed performances of both male and female groups backed by a live band. For many, Masters of Soul is the ultimate stroll down memory lane. For younger generations, the show offers an opportunity to experience an era in our country’s history that produced many of the greatest music acts ever recorded. Masters of Soul has performed to numerous sold-out audiences and garnered rave reviews across the country at venues ranging from community theaters and universities to performing arts venues and concert halls.

Chowan University Choirs will present an exciting and varied program of classical and contemporary choral music. Benjamin Thorburn is associate professor of music and director of choral activities at Chowan University. A versatile conductor and singer with experience in opera, oratorio and early music, he has appeared as a soloist throughout Virginia, the mid-Atlantic and the Northeast. As a music scholar, he is a specialist in Baroque music and performance practice and has presented his research at national and international conferences. He received a doctoral degree in music history from Yale University and a Bachelor of Arts in music from the University of Rochester.

The exhibit In Plein Site will showcase the work of artists participating in the Suffolk Center’s Plein Aire Event on May 5. Varying art will be works painted in the plein aire tradition. Artists will be primarily from the Tidewater area. An opening reception will be held from 5:30 to 7:30 p.m. May 10.

Alumni and faculty who had been connected to Tidewater Community College’s first campus gathered in Suffolk with friends and family... read more