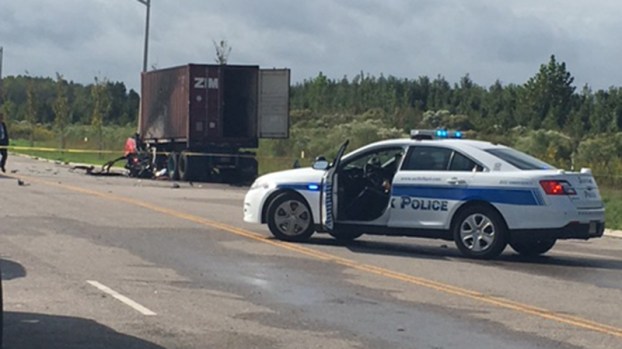 A man died when his pickup truck collided with an empty container trailer on Monday morning. (City of Suffolk photo)

A man died Monday morning when his pickup truck crashed into a parked tractor-trailer container.

The accident in the 2000 block of Northgate Commerce Parkway was reported at 8:28 a.m., according to a city press release. Firefighters were able to quickly extinguish the fire upon arrival, but the male driver was pronounced deceased at the scene, according to the release.

The container was empty, the release stated.

Based on the vehicle registration and the preliminary investigation, police have made notification to the next of kin, according to a city press release. However, due to the victim’s injuries, the medical examiner’s office has been asked to confirm the identity, so the name has not been released.

The traffic fatality team is investigating the crash. Traffic in the area was not affected.

The city of Suffolk recently learned it will receive more than $5.3 million for transportation system improvements throughout the city.... read more