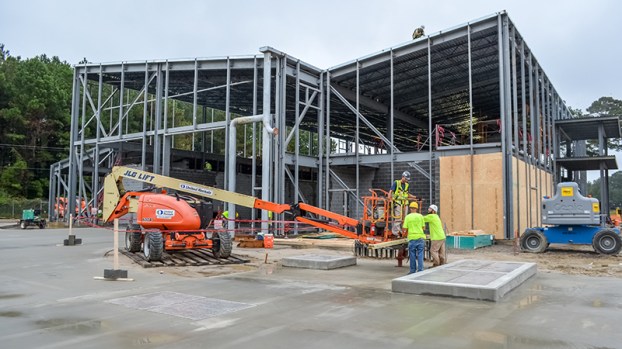 The Sustainable Water Initiative for Tomorrow Research Center at the Nansemond Water Treatment Plant in Suffolk is expected to be completed this spring.

The Hampton Roads Sanitation District invited visitors to an open house at the Nansemond Water Treatment Plant on Wednesday, where they walked under rainy, overcast skies for a closer look at ongoing construction of a new research facility.

Crowder Construction Company broke ground on the $25 million research center for the Sustainable Water Initiative for Tomorrow in March. The research center is expected to be completed and ready to produce up to 1 million gallons of SWIFT water per day this spring.

SWIFT is a $1.1 billion program meant to reduce the amount of nutrients discharged in the James, Elizabeth and York rivers and address the dwindling groundwater levels in the Potomac Aquifer, the primary source of groundwater throughout eastern Virginia.

Scientists and engineers tested two drinking water treatment technologies in the 2016 SWIFT pilot project at the York River Treatment Plant. The results of this project were used to determine the best technology for the SWIFT research center.

Water treated using Carbon-Based Advanced Water Treatment will be injected into the aquifer rather than discharged into the river. This helps prevent any unwanted soil nutrients from affecting the water and inhibiting flow throughout the aquifer.

This will also help reduce the discharge of nutrients like phosphorus and nitrogen, Dano said.

“We have the opportunity to both replenish the groundwater supply and drastically reduce the nutrients going into the Chesapeake Bay,” he said.

The Potomac aquifer along the Virginia coast is several thousand feet thick with hundreds of trillions of gallons of pressurized water.

This pressure has decreased over centuries of unsustainable water withdrawals, causing land to sink from the compaction of the aquifer and increasing the potential for salt water contamination with the relative rise of sea levels.

HRSD modeled the effect of adding 120 million gallons of purified water daily into the aquifer. The results predicted that the recharging addition will support all existing permits for groundwater use, with capacity for future withdrawals.

HRSD General Manager Ted Henefin explained that this would reduce the gradual land sinking from 4 millimeters to 3 or 2 millimeters annually. This would counter rising sea levels, and regional groundwater users will see the benefit as years pass in the increased pressure of their personal wells.

“If successful, we’ll be able to slow down the effect of sea level rise in the region by 25 percent,” Henefin said. “The longer we can delay that effect, the better it will be for the region.”

Their goal is to obtain necessary approvals to construct the first full-scale SWIFT facility in 2020, capable of adding 8 to 30 million gallons per day.

The U.S. Geological Survey drilled a 2,000-foot hole in a corner of the Nansemond Treatment Plant for an extensometer that will measure the rate of water pressure in the aquifer from the replenishment.

“That will help us calibrate and build better models to project how things are at the large scale,” Dano said.

The golf cart maintenance building at Sleepy Hole Golf Course was completely destroyed in a fire on Wednesday evening. The... read more