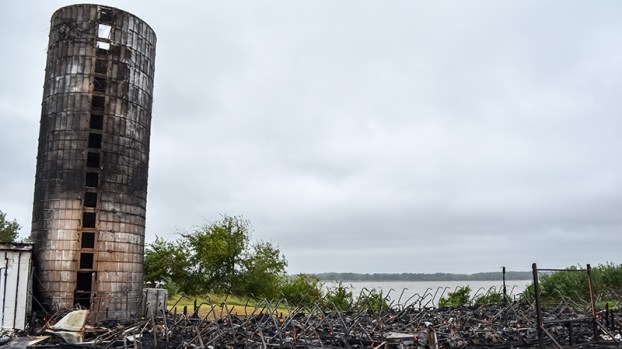 The bitter smell of burnt steel and wood lingered at the remains of the golf cart maintenance building on Thursday. Located near the historic Obici House at Sleepy Hole Golf Course, the building caught fire Wednesday evening.

A fire at Suffolk’s Sleepy Hole Golf Course on Wednesday resulted in hundreds of thousands of dollars’ worth of property damage.

Emergency Communications received a call about a commercial structure fire at the course at 7:50 p.m. and the first units arrived at the 4700 block of Sleepy Hole Road at 7:53 p.m., according to a city press release. The course had closed at 6 p.m. that evening, and no employees were present at the time of the call.

The golf cart maintenance building near the historic Obici House was engulfed in flames and destroyed, along with all 75 carts inside. Director of Golf Operations J.T. Belcher estimated the damage at $375,000 for the carts alone.

“It burnt down all 75 of my golf carts, just totally destroyed them,” he said.

The silo beside the structure received extensive damage and is expected to be demolished, while an adjacent shed received minor damage. There was no damage to the Obici House.

Belcher said a neighbor made the emergency call and told him there had been an apparent lightning strike.

“That’s what neighbors said they heard,” he said. “It was a big crackling boom. One guy told us it shook his house over on Route 10.”

Suffolk Fire Marshal Lt. Chuck Chapin confirmed this on Thursday following his office’s investigation. Witnesses reported a lightning strike in the area between 7:15 and 7:20 p.m. during strong thunderstorms Wednesday evening, according to a city press release.

Belcher said 40 golf carts are being rented from Ricky’s Custom Carts on Holland Road to make up for the loss, and up to 70 could be rented in the next three to four months if necessary.

“The golf course itself is our lifeline,” he said. “Golf carts can be replaced. It’s just about getting them into our hands.”

The course held a Kimberly-Clark tournament on Thursday and will hold the Rumble in the Morning on FM99 Who’s Your Caddy Golf Tournament on Saturday. Both events were moving along as planned, Belcher said.

The golf cart maintenance building at Sleepy Hole Golf Course was completely destroyed in a fire on Wednesday evening. The... read more