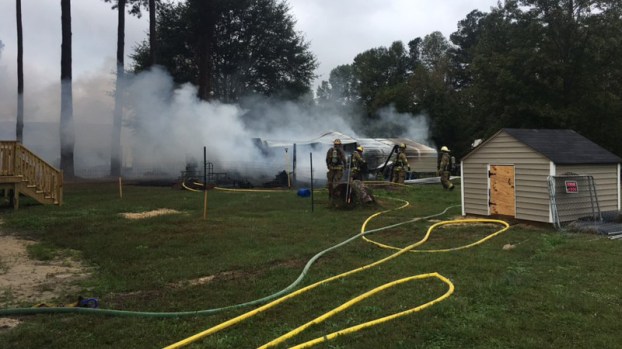 Fire destroyed a garage at a residence on White Marsh Road on Thursday. (City of Suffolk photo)

A garage was destroyed in a fire on Thursday afternoon in the 3500 block of White Marsh Road.

The fire was reported at 12:33 p.m., and the first units arrived 10 minutes later, according to a city press release. Firefighters found the garage fully engulfed in flames, with fire showing on all sides of the structure.

Residents had evacuated the nearby home prior to the arrival of firefighters. Firefighters conducted a defensive attack due to the close proximity to the residence and other outbuildings.

The garage and its contents were a total loss, according to the press release. A nearby outbuilding and the primary residence had minor heat damage.

There were no injuries.

The fire marshal’s office is handling the investigation on the cause of the fire.

The Hampton Roads Sanitation District invited visitors to an open house at the Nansemond Water Treatment Plant on Wednesday, where... read more