Man gets prison time for con

A former Suffolk resident will serve nearly six years in prison for conning a wealthy widow out of all her cash.

Federal court documents say he bilked the woman, identified only as R.B., out of about $377,000. However, 2014 court documents from Suffolk Circuit Court say the con stole about half a million dollars from the woman, identified as Ruth Baker, the owner of a Bank Street mansion she bought at auction in 2012 and hoped to turn into a bed and breakfast.

Baker moved to Suffolk in fall 2012, about a year after her husband and two of her sisters had died. Initially knowing nobody in the community, she met Withers soon afterward, and the deceit began. 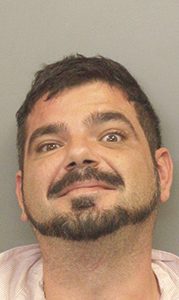 Like many people in the community, Baker believed Withers to be the co-owner, and later sole owner, of the C3 Vino wine and charcuterie shop in downtown. In fact, he was never the owner — and that was only the beginning of all the lies he told her, according to her complaint for annulment.

Baker lent Withers large sums of money, which he said would help him run the business. But by summer of 2014, she began to implore him to pay back the money, because she had exhausted almost all the liquidity from her husband’s estate.

Withers told Baker he had talked to attorneys, who suggested it would be easier for Baker to get her money back from the “inheritance” if they were married. They got married June 27, 2014, in Norfolk. She later had the marriage annulled when it became clear he would not pay back any of the money.

Withers continued to say the money was on its way. When Baker needed to travel to Florida for her daughter’s medical issues but didn’t have the money, Withers suggested she get a car title loan and that he would pay the loan as partial repayment. He never did, and her vehicle was repossessed and sold.

Finally, Withers said the money was on its way. He claimed that he needed to travel to California to get a check from an attorney and would do so on a private jet. He sent her pictures from inside the jet and the tarmac where the plane landed, both of which later proved to be stock photos from the Internet.

Withers then said he was on his way to Florida with her money and her car. But then he said he needed to return to Virginia, because his sister attempted suicide — which, it was later learned, never actually happened.

When Baker returned to Suffolk in August 2014, she found her house in shambles, her vehicle repossessed, and her checking account overdrawn because he had deposited bad checks and then had written checks on them.

Baker described the devastating impact of the crimes in a statement filed in federal court.

“I have lost all financial freedom that my husband and I toiled a lifetime to achieve, which meant that I no longer have the means to visit my daughters and my grandchildren,” she wrote.

She has had to borrow a truck to work a part-time job for $12 an hour. She hardly drives anywhere or turns on the lights, because she can’t afford gasoline or the electric bill. The state has a lien on her home, because she has been unable to pay her taxes. Her gas service has been turned off since April, and she can’t afford health insurance.

Her condo in Florida was foreclosed on, and her credit is ruined.

“And all because Mr. Withers so callously and with great evil intent set out to steal what my precious husband and I spent a lifetime working to achieve,” she concluded.

Federal prosecutors didn’t hold back in their contempt for Withers’ actions in the court documents.

“The defendant took advantage of her fragile mental condition and essentially preyed upon her with a litany of false statements designed to have her give him money,” the documents state. “The sheer number of shameless lies told by the defendant to induce the victim to part with her money is staggering, capped by the false promise that his tax and legal problems, which supposedly were preventing him from accessing his money to repay her, would be solved if they were to get married.”

A psychological report stated that Withers “did understand the nature, character and consequences of his behaviors at the time of the alleged offense,” prosecutors wrote.

As evidence, they pointed to an October 2014 incident in Georgia, when Withers was arrested for driving under the influence. At the height of the Ebola panic, he told officials he had recently traveled to Africa and displayed symptoms of the deadly, highly contagious virus.

In fact, he hadn’t left the mainland United States since 2005, according to officials in Georgia. That netted him three counts of making false statements.

He was sentenced to a year to serve and was given the opportunity of doing six months at an inpatient drug rehabilitation program in Virginia.

A garage was destroyed in a fire on Thursday afternoon in the 3500 block of White Marsh Road. The fire... read more