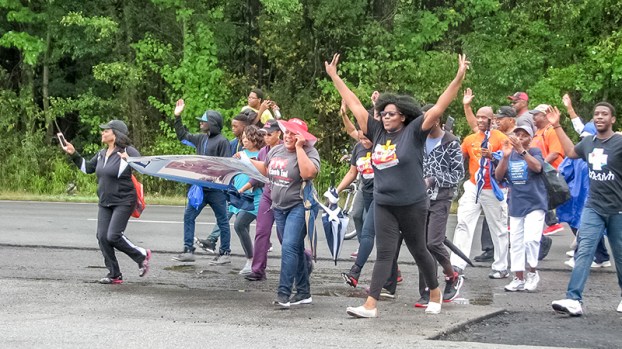 East End Baptist Church members celebrate as they make the final turn on their Saturday morning march from the church's old location to its new location. The first services in the new building are set for this Sunday.

‘To God be the glory’

The journey from the old to the new took less than an hour for members of East End Baptist Church on Saturday, but in reality the journey has been ongoing for 12 years.

About 120 church members and friends joined in a march Saturday morning from the church’s former location at 523 E. Washington St. to its new location at 1056 Portsmouth Blvd.

Along the way, they sang praises to God and waved to residents and motorists, many of whom waved back and honked horns in support. As they made the final turn of the 2.3-mile journey into the parking lot of the new location, they shouted thanks to construction workers who greeted them and the Suffolk Police Department and Suffolk Fire & Rescue personnel who had accompanied them along the way.

“We wanted to honor God in a different and great way, publicly, and celebrate the beautiful gift He has given us,” said Gail V. Bess, who helped organize the walk. She said members also hoped the event would provide a visible witness and outreach to the community.

Her husband, Alexander Bess, chairman of the deacon board, said the occasion brings excitement after 12 years of working on the project.

Elliott “Chris” Jones, vice chairman of the deacon board, agreed.

“It’s just really been a joy and a blessing to see this moment arrive,” he said. “It’s truly just a beginning, and we give God the glory. We couldn’t have done it without Him.”

“I really enjoyed getting the people together,” she said. “It’s been an encouraging time for all of us. It was a nice, historical moment.”

Following the march, members braved the drizzle for a little while longer to gather in prayer and then enjoy refreshments in the parking lot. Alexus Wilson, 17, prayed for the gathering.

“We have come through a lot,” she said, noting she was only 5 years old when the vision for the new building began. “It really means a lot.”

The pastor of East End Baptist Church, the Rev. Dr. Wayne Faison, said it was encouraging to see neighbors wave to the group and to see motorists show grace and patience.

“That was very encouraging,” he said.

Two phases of expansion to the current building on the 18-acre site already are planned, Faison added.

East End Baptist sold its former building to another church several months ago and has been meeting at Booker T. Washington Elementary School in the interim.

The morning service will be a dedication and consecration conducted by Faison. At the afternoon service, the official grand opening and 129th anniversary of the church will be celebrated, with the church’s pastor emeritus, the Rev. Dr. Mark Croston, returning to bring the message. Croston departed in 2013 to take a position as the national director of black church partnerships at LifeWay Christian Resources.

Faison said while the church will be able to use the lobby and sanctuary starting this week, it won’t be able to conduct Bible study there until November and will move its administration offices after the new year.

More than 20 volunteers from the Nansemond River Preservation Alliance and Colonial Pipeline Co. worked in the dirt with Suffolk... read more