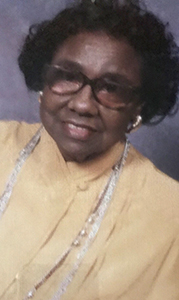 Mary was born on April 1, 1927, to the union of the late Ed and Clara Banks Phillips in Suffolk. Mary received her formal education in the Suffolk Public School system. She worked at the Planters factory in Suffolk for more than 46 years. After retirement from Planters, she was employed by Isle Wight County Schools as the special needs school bus monitor and a cafeteria aide.

Mary was a lifelong member of St. Paul Baptist Church in Suffolk. She was active in several church groups, including the Senior Choir and Usher Board. Mary was also a member of the Suffolk Elks Lodge, Sigma Gamma Rho Philos of Suffolk, and was the former president of Local Union No. 2426 U.A.W. in Suffolk.

Special thanks to Mom’s caregivers, Teresa Davis and Marsha Dudley; they loved her dearly.

A funeral service will be held at 11 a.m. Saturday, Oct. 21, 2017, at St. Paul Baptist Church, 806 Lincoln Ave., Suffolk, VA 23434. Interment will follow at Carver Memorial Gardens in Suffolk. Arrangements are under the care of Poole’s Funeral Home in Smithfield.

Contributions can be made in Mary’s memory to the Alzheimer’s Association or the American Cancer Society. Flowers are also welcomed.

Vanessa Boone Jacobs departed this life on Friday, Oct. 13, 2017. Vanessa is the daughter of Mary Christine Boone and... read more