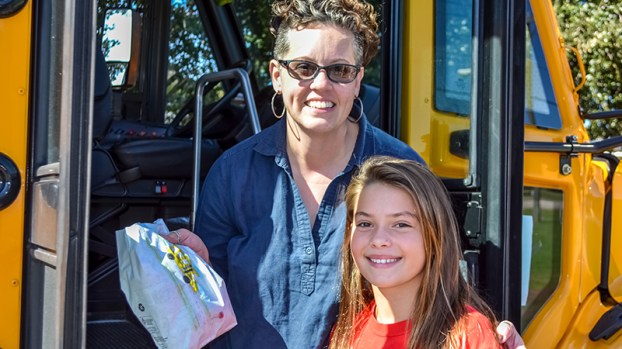 Students ran up and hugged drivers who had driven them to and from school in previous years. Signs read “Thank you” to the drivers, and several students happily held signs of similar gratitude as they left the parking lot.

Barbara Miskin, a bus driver with 17 years under her belt, was one of the drivers to be recognized by some passengers from years past.

“That’s what you get when you get the same route over and over,” Miskin said.

Students decorated more than 40 paper bags and paired drawings with words of encouragement like “Keep calm and drive yellow buses.” Each bag contained a water bottle and various snacks, from sandwich crackers to Tootsie Rolls.

“I love it,” bus driver Toni Smith said while holding a bag with a hand-drawn, bright-yellow school bus. “It’s really nice for them to take the time to actually draw a picture, and it’s really good.”

All banners, posters and bags were prepared by the students to show their appreciation for the 32 bus drivers and four bus aides waiting for them outside of the school, according to Courtney Wolfe, PTSA hospitality committee co-chairman.

“Imagine having a job to pick up children at 6:15 in the morning and delivering them to and from school every day,” Wolfe said. “They certainly deserve more than a bag of treats, but the hospitality committee is certainly eager to help however we can.”

Bus drivers handle numerous distractions every time they’re on their routes, including the children themselves. Some drivers have learned over the years how to keep the children occupied and communicate with them.

Kimberly Hall, for instance, assigned some of her passengers in previous years responsibilities like bus president, secretary and treasurer. These children earn candy by helping count the number of students on board in the afternoon, or encouraging others to follow safety rules on the bus.

“The kids are great, and normally if they’re acting up, there’s something going on and we just need to talk to them,” Hall said. “Kids go through the same things we do, but they just don’t know how to manage their emotions.”

Several students explained that they appreciated having that positivity from their bus drivers, and especially in the early mornings.

“It’s nice to have someone be so nice to you in the morning, when everyone is so grumpy,” said 11-year-old John Yeates Middle School sixth-grader Lauryn Breckner.

Bruce Waddles and Warren Ellis were no strangers to their lunch destination location in Chuckatuck Tuesday, even if this was... read more