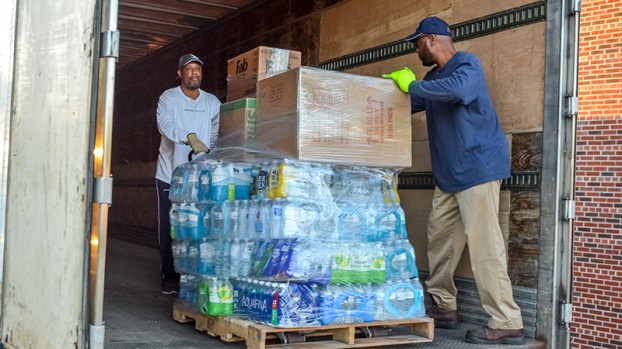 A Portsmouth congregation worked tirelessly with community partners to organize a shipment of relief items for a 1,300-plus mile drive to those in need.

Members of Grove Church organized a collection for “Friends Helping Friends…From Portsmouth to Houston.” Organizations and churches from Portsmouth to as far as Charlotte, N.C., donated necessities for residents in Houston, Texas affected by Hurricane Harvey.

“We want them to realize that they do have support, even from 1,000 miles away,” said Dr. Melvin O. Marriner, pastor at Grove Church.

Approximately 350 boxes’ worth of supplies were categorized and packaged over three days by more than 50 volunteers, along with the church’s youth ministry and a local Girl Scout troop, according to Irvine Lee, executive assistant to Marriner.

More than 1,000 bottles of packaged water were stacked with boxes of toiletries, baby essentials and cleaning products. Clothing for both men and women of all ages was also packed, and so much was collected that some clothes were donated to local shelters, Lee said.

Members of the congregation were stunned by how many items were collected in just a few weeks.

“Sometimes the vision is bigger than what you can imagine,” said member Evelyn Gunter.

Volunteers on Thursday packed the pallets of supplies into the trailer of an 18-wheeler heading to Houston. Lee said friends of the church will be waiting in Houston to distribute the items to families in need.

“We’re all one family in the United States of America,” said volunteer Darren Tyus. “When one of us gets hurt, we all hurt.”

Despite coming after working hours to pack everything in the evenings, Tyus described the process as a “joyous” event of community volunteers helping out with faces grinning.

“It makes you feel good at the end of the day,” he said.