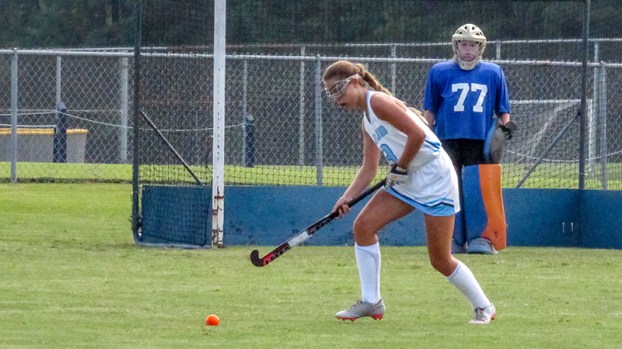 Ashton Moore gets the ball up the field for the Lady Cavs field hockey team during a recent game. The team is looking forward to showing what it’s made of in the postseason.

Lakeland High School is feeling good about the postseason after a 3-1 victory over King’s Fork High School Wednesday afternoon to end their regular season.

The Lady Cavs finished with a 7-9 record for the regular season.

“I am feeling pretty good with where we are right now,” Lakeland coach Cortney Parker said. “It has been kind of an up-and-down season. We have had some tough losses, but I feel like we have learned a lot from those losses. I think it has prepared us for the next step, which is regionals.”

Under a different playoff format last year, the Lady Cavs lost in the Conference 27 semifinal against York High School.

Through the season, the Lady Cavs have battled the injury bug while also having a lack of depth on the team. The Lady Cavs have two subs who are young, so this season has challenged Lakeland to step up in many ways.

“I think all these things have made the team mentally and physically tougher,” Parker said. “I think those are some of the things you have to go through sometimes to be successful in the postseason.”

Lakeland recently celebrated its three seniors, Alex Kinsey, Maddie Carr and Emily Campbell. Parker has liked how the seniors have stepped up in pivotal roles this season with their leadership.

“Their tenacity has been incredible,” Parker said. “They know now that one loss can end their season. They have really stepped up and are looking forward to keeping their season going.”

The players are eager to move into the next step of their season. They believe they have come a long way since the start of the season.

“We all take guidance from each other and learn from it to better ourselves,” Lady Cav Sarah Stansick said. “We look forward to the playoffs. We are at a good spot in the season, and we hope to grow from it.”

NR wins two in a row

The Nansemond River High School girls’ volleyball team set itself up well for the looming playoffs with two wins this... read more