Editor’s Note: The Suffolk News-Herald will provide coverage of candidates up for election on Nov. 7 on the following schedule: House District 64, Oct. 22; House District 77, Oct. 25; Commissioner of the Revenue, Oct. 29; and uncontested candidates for House of Delegates and constitutional offices, Nov. 1.

The 64th District includes parts of Suffolk, Franklin, Southampton, Isle of Wight, Surry, Sussex and Prince George. In Suffolk, all or part of the Whaleyville, Pittmantown and Holland precincts are in the 64th District. Only 9 percent of voters in the district live in Suffolk, according to the Virginia Public Access Project. The district is heavily Republican; Donald Trump won by 60 percent in the district during the 2016 presidential election, compared with 36 percent who voted for Hillary Clinton, according to VPAP. The seat is open, because Delegate Rick Morris decided not to seek re-election.

Emily Brewer hopes to make history on Nov. 7 by being the youngest Republican female to be elected to the General Assembly.

Brewer, 33, is running in the 64th District of the House of Delegates. 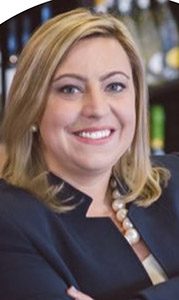 “It’s exciting for me, because I feel like this is the next opportunity for me to help people,” she said.

Brewer hopes to focus on such issues as economic development, adoption and foster care reform and tax code reform if she is elected.

“The General Assembly’s role is to open up the free market to be as successful as possible,” she said about economic development.

Transportation issues directly affect economic development, and Brewer said she wants to work on making sure Route 460 is a viable hurricane evacuation route so the area will be attractive for businesses.

“In Hampton Roads, I think hurricane preparedness is going to be very important,” she said. “It’s something we need to address, because that parlays into economic development.”

She said the area has also taken a step in the right direction with the Hampton Roads Transportation Accountability Commission, ensuring that the region’s transportation network can be improved using the extra taxes its citizens pay.

Brewer also wants to focus on adoption and foster care reform, as someone who was adopted herself as an infant.

She said the process of in-state adoptions needs to be easier.

“It’s very hard for some people to get approved,” she said. “I just want to make sure everyone has the opportunity.”

With statistics showing that children who are in foster care past age 8 are at greater risk for educational and socioeconomic troubles down the road, Brewer said it is imperative to ensure all children have an opportunity to find a permanent home.

“Why wouldn’t we want to do something that’s going to be impactful?” she said.

Brewer also hopes to work on the tax code. She advocates eliminating the Business, Professional and Occupational License tax. Improvements to the tax code will also improve the state’s economic development prospects by making it more attractive to businesses, she said.

Brewer said she’s also going to make it a priority to open a district office in Suffolk.

“I believe in being open and transparent with people,” she said.

Brewer lives in Holland. She graduated from Nansemond River High School in 2002 and attended Regent University.

She has been a member of Suffolk Business Women since 2011 and is also a member of the Holland Ruritan Club and the Paul D. Camp Community College Foundation board.