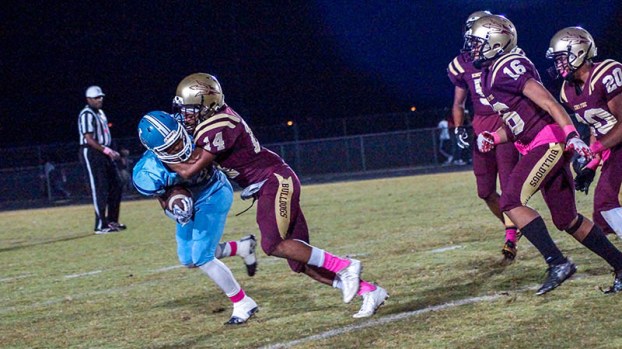 King’s Fork High School took the city championship this season with a 21-6 win over Lakeland at home Friday night.

It was not pretty between the two teams Friday night, but King’s Fork was able to squeeze out its sixth consecutive win with consistently improving defense.

“We didn’t play our best game on offense, but the kids played hard, and we made plays when we needed to,” Bulldogs coach Scottie Littles said. “Lakeland plays hard, and they are a scrappy team. I’m just glad our guys were able to weather the storm.”

Cavs coach Kevin Knight liked the way his team competed but could have done without the multiple turnovers the team committed.

“Defensively, we were flying around and playing good ball and containing the run most of the night,” Knight said. “Our effort was there, but we just couldn’t get it going offensively.”

In the first quarter, the Bulldogs got on the board first after a 14-yard touchdown run by Darran Butts. The score was set up by a fumble and a recovery by linebacker Devin Chambliss. On the following possession, the Cavs got right back on the board after Deondre Little took the ensuing kickoff 90 yards for a touchdown. A missed extra point left Lakeland down 7-6.

Neither team got much momentum going in the second quarter. King’s Fork forced its second fumble of the game in the second quarter but couldn’t get points off of turnovers. Lakeland’s defense was playing a bend-but-don’t-break style, giving up big plays in the run game but not allowing any points. At halftime, the scored remained 7-6, with King’s Fork having the lead.

Butts broke the game back open at the top of the third quarter with an 85-yard rushing touchdown. Lakeland could not get anything going on the following possession. The Bulldogs forced their third fumble of the game in the third quarter. Lakeland also forced a turnover, as Nate Edghill caught an interception. Once again, Lakeland’s offense stalled, giving King’s Fork another opportunity to push its lead up. A 42-yard touchdown pass from Justin German to Sam Dunn sealed the deal for the Bulldogs.

Butts finished with 202 yards rushing and two touchdowns. German completed 13 of 16 passing for 144 yards, one interception and a touchdown. Dunn had four catches for 71 yards and a touchdown. Elijah Askew and Chambliss made a lot of plays defensively for the Bulldogs, forcing and recovering fumbles.

The Cavs offense had opportunities to make things happen throughout the game. They had multiple possessions in King’s Fork territory but were unable to capitalize. Tyquan Holloman had 34 yards rushing and 45 yards passing. Defensively, Keonte’ Cobbs helped make plays for Lakeland.

“My guys played hard for four quarters. We just didn’t come out on top,” Knight said.

Nansemond River High School went to 4-4 on the season after a 28-7 loss to Deep Creek High School on... read more