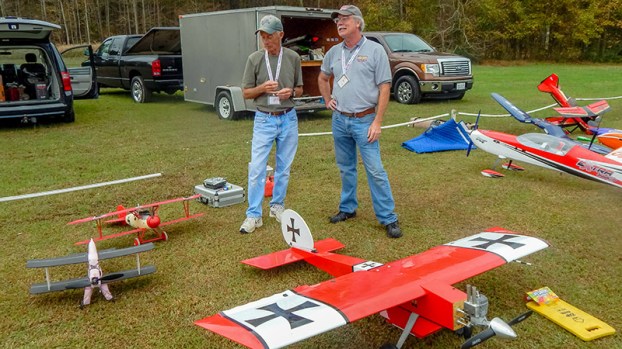 Members of the Hampton Roads Radio Control Club stand among some of aircraft staged for flying during an event at the club’s airfield at Lone Star Lakes Park. The club will have its annual Toys for Tots fundraiser on Nov. 4.

Enthusiasts to soar for kids

Skydivers, radio-controlled airplanes and Santa Claus are all on the schedule for an annual Toys for Tots fundraiser planned for a small airfield at Lone Star Lakes Park.

The 11th annual Toys for Tots Fly In will be held Nov. 4 by the Hampton Roads Radio Control Club, a nonprofit organization of recreational model aircraft pilots with more than 60 members, according to president Jeff Haywood.

The event will be held from 9 a.m. to 3 p.m. and is free and open for spectators to see all kinds of remote-controlled models soar over the HRRC flying field at the park. Those who would like to fly are asked to donate $10 or a new, packaged toy to participate with their own aircraft.

Models have ranged from helicopters to broomstick-equipped witches and flying pigs in past years, Haywood said.

“It just depends on the creativity on the guys that show up that day,” he said. “You never know what’s going to happen.”

He explained that these aren’t flimsy toys; models span up to 10 feet in wingspan and can cost up to $12,000. Hobby enthusiasts are able to scratch their flying itch and fly their aircraft inches from the ground without any risk to themselves or bystanders, he said

If there’s an unfortunate carsh, Haywood said, “Nobody gets hurt, other than our pride and our airplanes.”

Skydivers will drop in, and previous years have featured parachuters dressed like Santa Claus gliding in with an entourage of elves, Haywood said. Children will enjoy a candy drop from radio-controlled aircraft, and there will be a raffle with approximately $800 worth of offerings, according to event chairman Mills Taylor.

Taylor said that this was one the biggest fundraisers locally for Toys for Tots, with more than $50,000 raised in money and toy donations in the last 10 years.

“It should be a great day out in the sunshine,” he said.