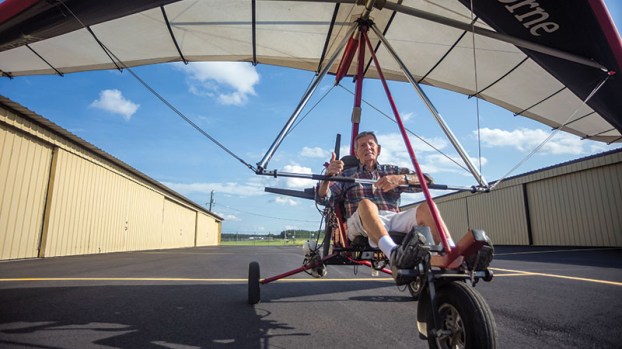 Chuck Piner lives for the chance to fly his ultralight aircraft, which he keeps in a hangar at the Suffolk Executive Airport. (R.E. Spears III photo)

Chuck Piner remembers the moment he saw his very first airplane, and it’s a memory that fuels a passion he still carries at the age of 91.

He was a child, playing near the railroad tracks near his home in Washington, N.C., waiting for a train to come by so he could wave at the engineer and get him to blow the whistle. But an even greater thrill was about to come roaring down the tracks.

Piner heard an engine, looked up and saw a 1929 Fleet 2 buzzing the railroad. The pilot waved, and little Chuck waved back. And that was all it took.

“It didn’t make my day; it made my month,” Piner said recently from his home on Manning Road. “I got my military training around the house with my arms out trying to make like an airplane.” 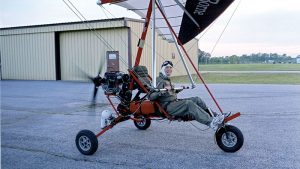 Chuck Piner has been in three airplane crashes, a motorcycle crash and a water-skiing mishap that nearly killed him. But he’s not ready to quit flying. (Submitted Photo)

About a decade later, Piner quit school at 15 and moved to Norfolk in search of a job.
“They said, ‘Come to Norfolk and get rich,’” he said.

When World War II came around, Piner didn’t initially recognize the golden opportunity it presented for him to get closer to airplanes than ever before.

“I wanted to go in submarines,” he said. “But when I left boot camp, they said I was qualified for AMM. I had no idea what it was.”

Piner finally got someone to tell him the answer — Aviation Machinist’s Mate.

“My job was to go out to the airplane and pre-flight it — check the fuel and start the engines, check all the instruments — do everything you would have to do in flight,” Piner said.

But unfortunately, he couldn’t be a pilot, because he hadn’t finished high school. 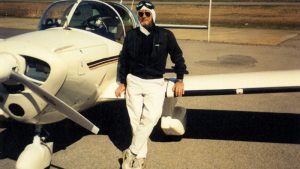 Chuck Piner shows off his personal plane during his post-war days. (Submitted Photo)

Even so, Piner got his aviation thrills in the Navy. He flew in the Atlantic and Pacific oceans out of the Panama Canal Zone and was part of the team that helped look for Flight 19, the five Grumman TBM Avenger torpedo bombers that disappeared in the Bermuda Triangle during a training exercise on Dec. 5, 1945.

But it was after he left the Navy that he really got his thrills.

“I was a thrill-seeker all my life,” he said.

He learned to fly at the Hampton Roads Executive Airport in Chesapeake with a club called the Portsmouth Flyers. He guesses he’s flown just about everything there is to fly, with the exception of blimps and hot-air balloons. He even skydived to celebrate his 82nd birthday.

But about 15 years ago, he learned how to fly ultralights. Piner’s flying machine, which looks like a large kite with a seat and engine, has a wingspan of about 33 feet and will fly at 35 miles per hour for about two hours before it’s out of fuel.

“It’s the most fun I’ve ever had in my life flying, and I’ve flown a lot of mess,” Piner said. “It’s the nearest thing to being a bird. It’s a wonderful feeling. I wish everybody could experience it.”

Although Piner is in constant pain — through the years he’s been in three aircraft crashes, a motorcycle crash and a watercraft crash — he said he hopes to continue flying ultralights as long as possible.

“I’m going to try to make it at least two more months,” he said. “I love it so much. It’s my life, and it has been for many, many years.”

Under ordinary circumstances, most people would be excited to get a free ride from actor Harrison Ford in his private... read more