The 77th district includes parts of Suffolk and Chesapeake. In Suffolk, all or part of the White Marsh, John F. Kennedy, Southside, Booker T. Washington, Lakeside, Olde Towne and Hollywood precincts are in the 77th district. About 21 percent of voters in the district live in Suffolk, according to the Virginia Public Access Project. The district is heavily Democratic; Hillary Clinton won by 72 percent in the district during the 2016 presidential election, compared with 25 percent for Donald Trump, according to VPAP. Cliff Hayes is the incumbent, having served one year to fill out the unexpired term of Lionell Spruill Sr., who stepped down to run for Senate.

Cliff Hayes Jr. is running re-election to the House of Delegates seat he won only a year ago. 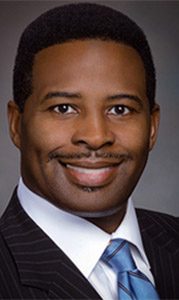 Hayes said health care, education and safer communities are among his top priorities.

“I’ve decided to jump in and try to be a part of the solution to providing better health care for Virginians,” Hayes said. “We need to continue to fight for affordable health care and see what we can do to try to expand Medicaid in Virginia.”

Aside from expanding Medicaid, Hayes said he wants to tackle the opioid crisis and improve mental health.

“It’s a serious problem, the opioid crisis that we have,” he said. “We have to do all we can to help educate the public about the issue.”

Hayes said naloxone should be made readily and quickly available to people suffering from an opioid overdose. The medication immediately reverses the effects of an overdose.

Hayes also said the number of people in the justice system who suffer from mental illness needs to be decreased. Many times, providing appropriate treatment before they end up in the system is better.

“We’re going to pay one way or the other,” he said. “Better to have the investment on the front end with productive citizens.”

In education, Hayes said he wants to be able to improve the salaries and benefits offered to teachers.

“We want to first get back to a place we can offer a salary and benefits to those that decide they want to go into education so it will be attractive to those coming out of college,” he said. “We have to do something to make those careers competitive so we have our best and our brightest go into those fields. What other profession do we have that’s as critical?”

Safe communities are another area of interest for Hayes, and that encompasses not only education but also comprehensive services, law enforcement, childhood hunger and more.

“There is no silver bullet, if you will, that can take care of the community,” Hayes said. “It’s a comprehensive approach to help to elevate the quality of life for those in the 77th. We need to work on education, but we also need to work on wraparound services.’

Hayes said law enforcement should get incentives to be more engaged and involved in the communities where they are working. Programs for young people are also needed.

“Kids are getting out of school and having to have some positive programs in the community,” he said.

Hayes served on the Chesapeake City Council from 2004 to 2012. He is a graduate of Oscar Smith High School and Norfolk State University and has a master’s degree in business administration from Cambridge College. He works in information technology in the Norfolk Sheriff’s Office.

Editor’s Note: The Suffolk News-Herald is providing coverage of candidates up for election on Nov. 7 on the following schedule:... read more