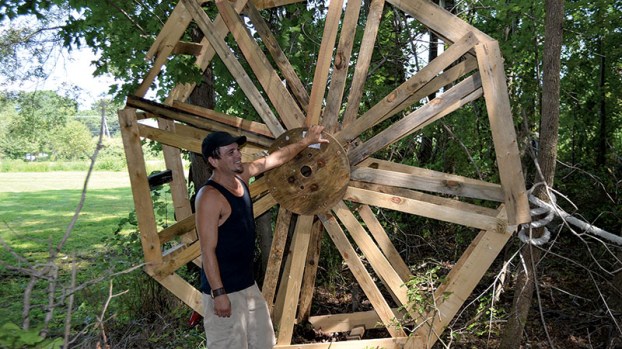 Matthew Schlabach stands with one of the creations he made for children who play in the area behind the house where he is living on Nansemond Parkway.

‘Whatever you can imagine’

Matthew Schlabach walks a path made of salvaged lumber and nails in the woods behind his garage workshop. He takes careful steps past a water wheel in the dirt that stands more than 12 feet tall.

He calls this space “Fort Rufio” after the leader of the Lost Boys in the Robin Williams film, “Hook.” The elaborate fort-in-progress is just one of his countless projects to be found in the backyard of the Nansemond Parkway property.

“I come out with my coffee, walk the earth, and an idea will pop,” he said. “It just comes to me.”

The 34-year-old Chicago native moved to Virginia Beach with his mother and Navy stepfather when he was 8. He was 13 when he met his longtime friend, Crystal Selby, who praised his unbridled enthusiasm over the years. 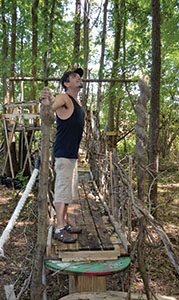 “Anybody would be jealous of the pure energy he has all the time,” Selby said.

Schlabach moved in with Crystal, her husband, Jason, and their children after his Virginia Beach home was destroyed last year by Hurricane Matthew. Around the same time, he lost his job in the city and his relationship with his former fiancé.

“I lost everything,” he said.

He has no formal artistic training other than a high-school woodshop class, but he said he’s been creative since he was a child building forts in the woods near his home. He finally came out of his depression, he said, when he just picked up a hammer one day and got back to his creative roots.

This inclination includes fashioning special tools to cut through any crafting challenges.

“If I need something special, I make it work,” he said. 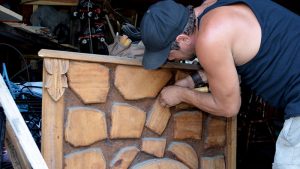 Matthew Schlabach set himself free from creative restraints to build the various whimsical structures in the backyard of the Nansemond Parkway home where he lives.

Selby’s backyard is filled with his creations. There is a flower garden built in the shape of a peace sign made from lumber he found while driving around in his pickup truck. One tree is loaded with birdhouses, and near a cobblestone path of Schlabach’s making is a chicken coop for the farm birds that roam the property.

He has various furniture and amenities for sale in the front yard, and the children enjoy seesaws he’s made, along with other contraptions.

His own children, 4-year-old Annabelle and 3-year-old Samuel, visit their father regularly to join in his creative pursuits. He said he leaves some of his projects purposely unfinished to let his children realize their potential.

“I guess the inspiration for me is to show them that you can do anything you want to do and whatever you can imagine,” he said.

Under ordinary circumstances, most people would be excited to get a free ride from actor Harrison Ford in his private... read more