Citizens nationwide can safely dispose of their unwanted or expired drugs on National Prescription Drug Take Back Day on Saturday, part of an effort by the United States Drug Enforcement Administration to curb the sweeping epidemic of opioid addiction.

Suffolk residents, however, can do this anytime, thanks to a partnership between CVS Pharmacy and the Suffolk Police Department.

People can just walk inside and dispose of their prescriptions and any other unwanted medications, including over-the-counter tablets and capsules, liquid medications, inhalers, ointments, nasal sprays and even pet medication, according to a press release. 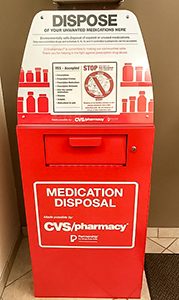 Needles and injectable solutions, however, are not accepted.

No personal information is required and labels do not need to be removed, Brandsasse said.  Both secured boxes are emptied into an incinerator at least once a month.

Drug boxes have been donated to police departments across the country to keep people from contaminating their local water supplies by flushing unused drugs down the toilet, and to help stem the rising tide of drug abuse in the U.S.

“It’s out of control right now in the whole country,” Brandsasse said. “If we can do something to start at home to help prevent this, then that’s what we want to do.”

The number of Americans abusing heroin doubled to 700,000 from 2007 to 2012, according to the National Institute on Drug Abuse, and half of young people using heroin started by abusing prescription opioids.

Brandsasse sought to have the drug collection boxes set up here because of citizen concerns and demands she heard when she was running a narcotics unit. She described how older residents sometimes leave numerous medications in their homes when they die, and the drugs are then vulnerable to theft, even by family members.

“We don’t want to think that family members will take them, but some do, and this is how a lot of younger kids get addicted to these medications,” she said. “It just rolls downhill from there.”

Drug collection locations for the special takeback day will be open from 10 a.m. to 2 p.m. Saturday across Hampton Roads, although no special locations are listed in Suffolk that day.

Search for locations online at deadiversion.usdoj.gov/drug_disposal/takeback.