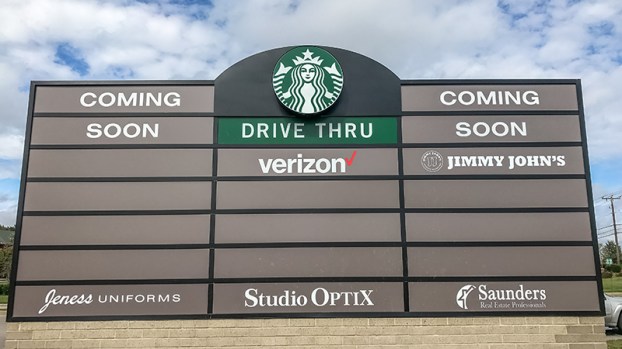 Jimmy John’s, Starbucks and Saunders Real Estate are a few of the upcoming retail options at the shops at Centerbrooke Village off Godwin Boulevard.

Retail offerings at the new Centerbrooke Village shopping center off Godwin Boulevard continue to expand, and officials say there is more good news on the horizon.

A Verizon store is open there, along with a Jeness Uniforms branch that opened on Sept. 25. The first Suffolk store for the workplace uniform retailer is expected to have a grand opening ceremony in November, according to company owner Richard Cruce.

“Suffolk seems to be an up-and-coming area, and this location seemed perfect for a retail store like ours,” Cruce said. “It’s close to Obici hospital, and there’s nothing else around for nurses unless you drive to Norfolk and Virginia Beach.”

Studio Optix/Shell Optical Co. moved from its former location on Pruden Boulevard and opened a shop at Centerbrooke Village on Sept. 3. The Suffolk optometrist has been in business since 1979, according to optician Janet Simpkins, and the move was made to get more exposure.

“We’re seen from Route 10, we’ve got Verizon beside us, and the parking is a lot better,” Simpkins she .

Saunders Real Estate is expected to open its new office in the shopping center on Nov. 1, according to office manager Krystle Tomlin.

Jimmy John’s sub shop will also open a new store at the location, and a Starbucks is in the works. The new Jimmy John’s store is expected to open early 2018, according to a spokesperson. A Starbucks spokesperson declined to comment on that chain’s schedule.

There are four additional letters of intent for shop space at the location from undisclosed parties, according to Troy Parker of Parker Burnell Real Estate.

Question: What are your plans for Halloween?