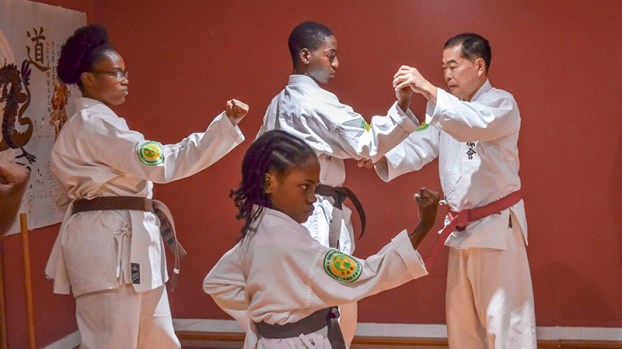 The students controlled their breathing as they practiced the precise movement of their karate “kata,” a Japanese word meaning form.

The four teenagers stood in formation on the padded mat at the Dojo Mount Everest Karate Studio on Eclipse Drive on Wednesday evening. They moved slowly with open palms before sharply changing their stances with closed fists, bended knees and short yells.

As they sweated, Grand Master Keishun Kakinohana corrected each student’s form with a firm grip, sometimes striking their legs to test their balance. He offered advice to the students with the help of Awi Espiritu, the English interpreter by his side.

“In the Olympics, if your hands are not in the center, they will take points away,” Kakinohana said in Japanese as he corrected the placement of a student’s straight-armed fist.

Kakinohana, a world-renowned, ninth-degree black belt from Okinawa, Japan, arrived in Suffolk on Sunday to spend a week teaching at the Suffolk dojo alongside Mark Greville, a longtime colleague and fellow grand master born and raised in Australia.

The two grand masters were invited by Carlos Rivas, the Eclipse karate studio master and a former student of Kakinohana. Rivas said he wanted his students to learn the old ways of karate, especially from someone as esteemed as Kakinohana.

“He’s considered a living treasure for the example that he sets for others,” Rivas said about Kakinohana. “You can’t buy that.”

Kakinohana is a grand master of Shorin-ryu, one of the oldest styles of karate. The 70-year-old said he began training in Okinawa at the age of 13 shortly after World War Two had ended to be strong enough to protect his family.

As he got older, he learned that karate was less about fighting and more about the mind, heart and spirit, he said.

“I learned so much about the spirit of karate, and I want to share that with others,” he said.

Greville, who has been teaching since 1977, explained that there are many misconceptions in western culture about karate. That it’s not about learning to hurt someone, but to hone yourself to have a sharp mind and unwavering focus, especially for learning kata, the 62-year-old said.

“It’s like a living textbook,” he said. “Once you can do kata, you can apply it in many different ways.”

Kakinohana has been training children in the basics of karate for the last decade, and his organization Shorin-Ryu Shorinkan Karate teaches thousands in India, he said. His stern face and powerful voice has been known to be intimidating to many students that come to respect the grand master immensely.

“Students of his that are 40 or 50 years old now are still kind of afraid of him,” Espiritu joked.

What’s most important is to build trust and understanding with the students so they accept the process and learn, he said.

“Once they trust me, they’re not afraid to be disciplined,” he said.

The grand masters trained with the students at the Eclipse dojo each evening from Monday through Thursday. While Greville walked younger students through the basics, Kakinohana worked with Jordan Talbert, Treshaun Whittaker, Teress Dobie and Camauri McPherson to prepare them for their black belts tests this March.

Kakinohana showed them how deep, controlled breaths will lessen the pain of a blow. He used a wooden stick to demonstrate correct posture and practice how to defend against an armed attacker.

His demeanor was serious, yet he still gave a satisfied smile at their performances.

“You can tell he’s very wise, and he’s a very vibrant person,” 14-year-old Jordan said. “Even though he’s very scary on the outside, he’s very kind in the center.”

The grandmaster was impressed by how well Rivas taught his students. He said that they embodied the good character karate demands, and that they should do well in their tests and competitions to come.

“If you work hard, good things will come to you,” he told the students.

The hauntings on Highland Avenue will start Saturday and continue on Halloween night. Danny Lester and William VanHorn have once... read more