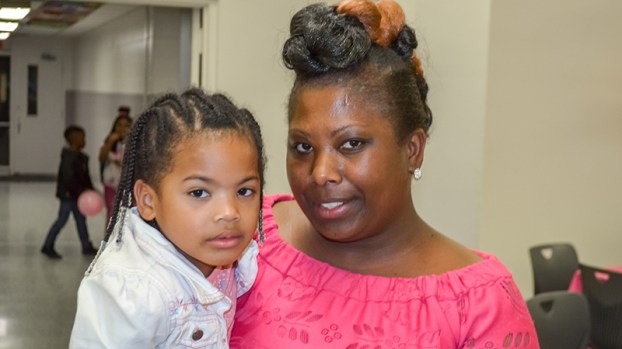 Shameka Woodley and her daughter Jaice, 3, at the family fun night held by Suffolk’s Boys and Girls Club at John F. Kennedy Middle School on Thursday.

A night of family fun at Suffolk’s John F. Kennedy Middle School featured an emotional presentation by a mother with her child, both of whom are cancer survivors.

The Boys & Girls Club of Southeast Virginia Suffolk Unit hosts a family night on the fourth Thursday of each month with pizza, chips and other refreshments for children and their parents. About 20 families filled the middle school cafeteria with music, dancing, games and cheer on Thursday, Suffolk Unit Director LaMarr Coles III said.

“They can see what we’ve got at the club and also get a free meal without having to cook,” Coles said.

The music and laughter were silenced when Suffolk resident Shameka Woodley began telling her story.

Woodley was diagnosed with breast cancer on Jan. 20, 2014, the same day she found out that she was pregnant, she said.

She said the doctors advised her to terminate the pregnancy to prevent any complications during her treatments. She spoke with her family and her pastor, but what ultimately convinced her was an episode of “Maury,” where she first heard the name Jaice, she said.

She found out the name meant “healer” and “God’s salvation.”

“I felt it was like a sign from God letting me know I would be healed,” she said. “I thought, ‘There’s no way I’m getting rid of that name. Jaice is coming to this world.’”

She described how she lost her hair and became progressively more fatigued as the treatments went on for months. Then, about seven months into her pregnancy, she went into labor and her daughter was born prematurely, she said.

“The doctor was putting on her gloves and said, ‘You’re having this baby today,’” she said.

Jaice was born and given intensive care, which helped her survive, Woodley said. The 3-year-old was worn out from the evening at the table beside her mother.

Woodley formed the non-profit Ladies of JAICE competitive dance team in 2015 to help raise awareness of breast cancer and to encourage women to get mammograms.

“You don’t think stuff like that will happen to you, but it can happen to anyone,” she said.

Her story left a strong impression on the audience, Coles said.

“It was amazing,” he said. “Shameka did a great job of commanding the attention of the audience.”

Shequita Matthews, who was there with her 12-year-old daughter, Passion Arline, said Shameka inspired her to stay on top of her health and get regular mammograms.

“I probably should have had one already,” Matthews said.

Latonya Foster was moved by how Shameka kept her faith when things got bleak, she said.

“Anything is possible with God,” she said.

For more information on Ladies of JAICE, go online at www.facebook.com/ladiesofjaice.

A John Yeates Middle School student has been suspended for 10 days pending a hearing after allegedly posting a threatening... read more