The commissioner of the revenue is one of five constitutional offices in Suffolk, all elected positions. Three others are unopposed this year, and the fifth is elected on a different cycle. According to the commissioner’s website, the purpose of the office is to assess all personal property, issue city business licenses, administer special taxes and process state income tax returns.

Lue R. Ward Jr. is challenging incumbent Susan Draper for the commissioner of the revenue job.

Ward declined to talk to the Suffolk News-Herald for this story. 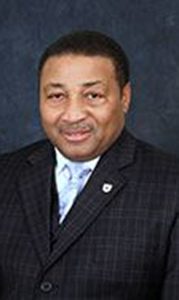 Ward has been a member of City Council since he was first elected to represent the Nansemond Borough in 2012. He was re-elected in 2016.

Ward has been a resident of Suffolk for more than 30 years, according to his biography on the city of Suffolk website. He is the founder and publisher of two community newspapers and a magazine — Suffolk Happenings, Hampton Roads Happenings and Having Church Magazine.

He is a former president of the Nansemond-Suffolk branch of the NAACP.

A night of family fun at Suffolk’s John F. Kennedy Middle School featured an emotional presentation by a mother with... read more